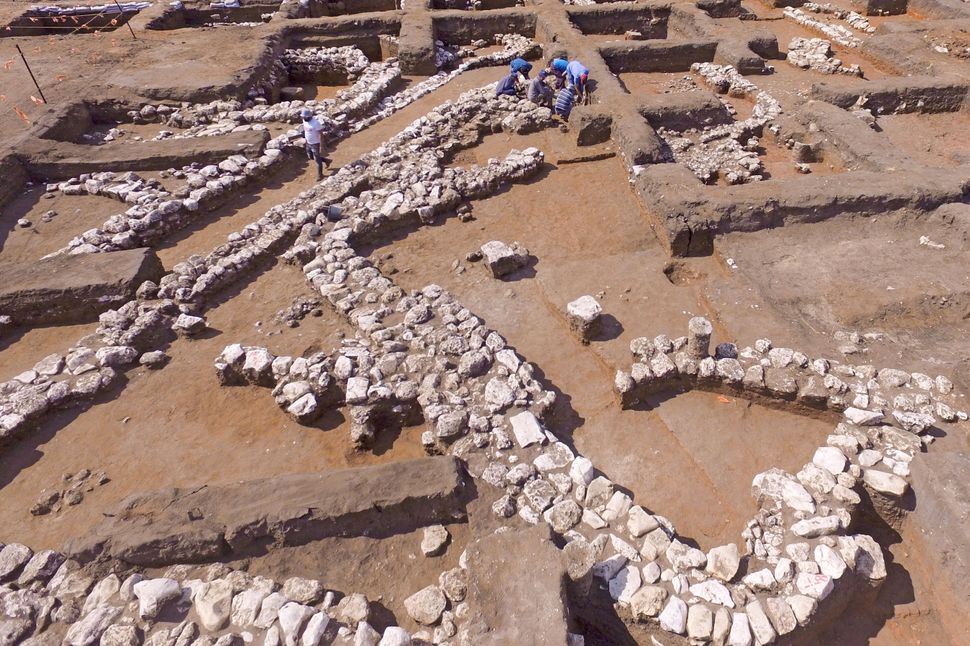 Israeli archaeologists work at the ancient site of En Esur (Ein Asawir) where a 5000-year-old city was uncovered, near the Israeli town of Harish. Image by Getty

JERUSALEM (JTA) — Archaeological excavations in northern Israel in preparation to build a highway off-ramp uncovered a 5,000-year-old city that was home to as many as 6,000 residents.

It is one of the first and largest early Bronze Age settlements excavated in Israel, according to the Israel Antiquities Authority, which announced the discovery on Sunday.

“This is the Early Bronze Age New York of our region; a cosmopolitan and planned city where thousands of inhabitants lived,” Itai Elad, Yitzhak Paz and Dina Shalem, directors of the excavation, said in a statement.

The antiquities were discovered during massive excavations, initiated by Netivei Israel-the National Transport Infrastructure Company, which was carrying out groundwork for construction of an interchange road to the new Israeli city of Harish.

The excavations have been in progress for two and a half years. Deeper excavations found that the ancient city was built over an even more ancient 7,000-year-old settlement.

The attraction for both settlements appears to be two abundant springs originating in the area in antiquity, according to the IAA.

About 5,000 teenagers and volunteers participated in the excavations as part of the authority’s Sharing Heritage Project.

“There is no doubt that this site dramatically changes what we know about the character of the period and the beginning of urbanization in Israel,” the excavation directors said.

The new interchange will be built high above the ruins, preserving it for future generations.