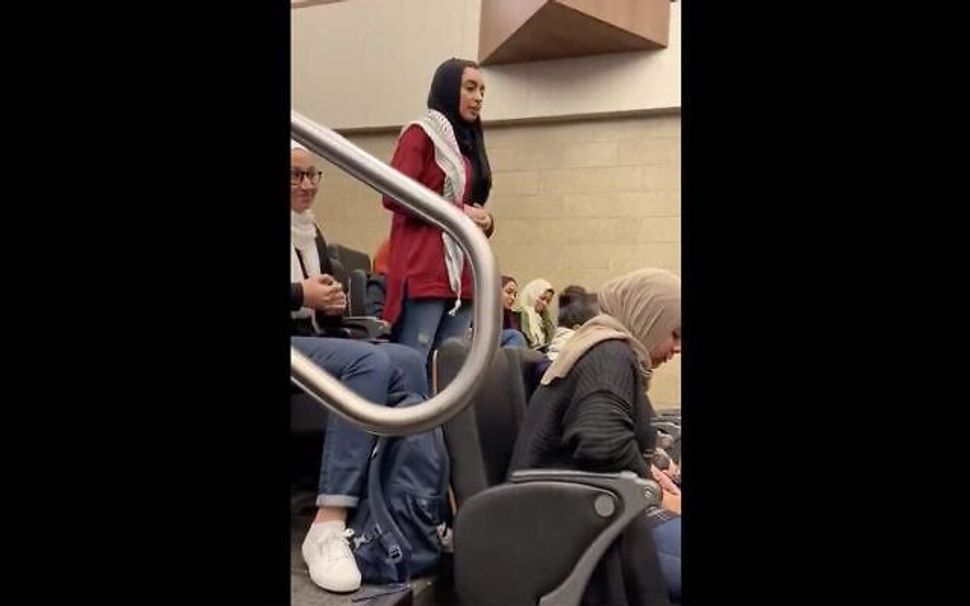 A student from Students for Justice in Palestine speaks to a Holocaust survivor at Benedictine University in Lisle, Ill. Image by Benedictine SJP/Twitter

(JTA) — A Palestinian student at Benedictine University called on a Holocaust survivor to condemn the establishment of Israel, and then walked out on his speech after he did not do so.

Following a speech last week by Professor Harold Kasimow, who survived the Holocaust as a child, Benedictine senior Ayah Ali asked a question which drew a parallel between Kasimow’s experiences and Israel’s treatment of the Palestinians. Ali, according to her Twitter feed, is affiliated with the Chicago-area school’s chapter of Students for Justice in Palestine.

“It honestly means the world that you were willing to share your story with us, but I wanted to bring your attention towards a similar story,” Ali said. “I’m sure you know about whats happening in Palestine and my question to you is, do you support or do you condemn the establishment of the Zionist Israeli state, and whether it’s OK to exile and completely — the complete ethnic cleansing of the Palestinian people, the way that the Jewish people were exiled and ethnically cleansed?”

Kasimow, an emeritus professor of religious studies at Grinnell University who is a visiting scholar at Benedictine this year, answered that the Israeli-Palestinian conflict is “not an area of my experience.” He added that though he is “not happy with the government in Israel,” he believes the state should exist. He said that both sides of the conflict bear responsibility for solving it.

Earlier this week, Holocaust survivor, Harold Kasimow spoke at Benedictine University. He described to us what it felt like to undergo horrific circumstances such as the Holocaust at a very young age. pic.twitter.com/njgmerzf8J

Ali responded that she is “a result of experiences that you’ve been through. I am a survivor of the intifada.” She said “it’s disappointing to know that a Holocaust survivor would remain neutral in a situation of injustice.”

Kasimow said that “it’s not a matter of neutral, it’s not total guilt or innocence on either side.”

After reiterating her comments, Ali walked out of the speech. The school’s chapter of Students for Justice in Palestine tweeted out videos of the exchange.

The Jewish Telegraphic Agency has reached out to both Kasimow and Ali seeking comment.