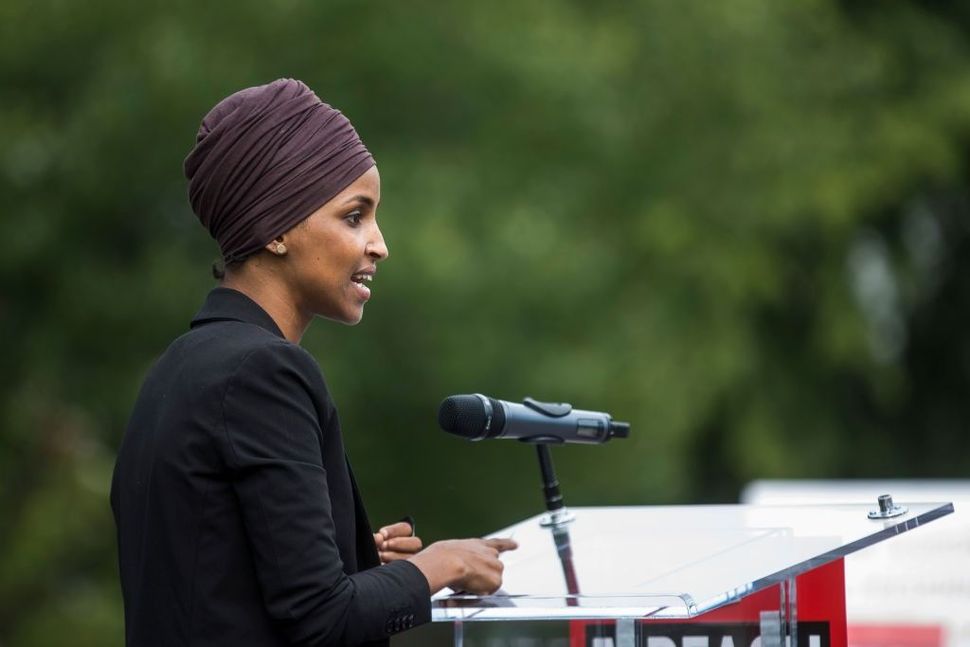 Rep. Ilhan Omar speaks at a rally hosted by Progressive Democrats of America on Capitol Hill on September 26, 2019 in Washington, DC. Image by Zach Gibson/Getty Images

The House of Representatives overwhelmingly voted Tuesday to pass a resolution recognizing the Armenian Genocide, but Democratic Rep. Ilhan Omar of Minnesota was one of only two Democrats to vote “present.”

“My issue was not with the substance of this resolution. Of course we should acknowledge the Genocide,” she tweeted in response to MSNBC host Chris Hayes. “My issue was with the timing and context.”

The resolution, which passed 405-11, was the first congressional measure to ever recognize the Ottoman Empire’s killing of 1.5 million Armenians between 1915 and 1923. The measure had previously failed to pass because of opposition from Turkey, a NATO ally that refuses to recognize the genocide. It attracted more support this time because of congressional anger at Turkey’s military actions against the Kurds, The New York Times reported.

“I think we should demand accountability for human rights abuses consistently, not simply when it suits our political goals,” Omar tweeted. Other 20th century genocides, as well as the American slave trade and extermination of Native Americans, should also have been acknowledged, she said in a statement.

Omar is a divisive figure in the American Jewish community whose detractors bemoan her criticism of Israel and association with Minister Louis Farrakhan, who makes anti-Semitic remarks.

“Is there a right or wrong time to … stand up for justice that she claims to be a champion for?” Rev. Tadeos Barseghyan, pastor at St. Sahag Armenian Church in St. Paul, told the Star Tribune.

Omar published an op-ed in The Washington Post last week questioning proposed sanctions against Turkey, saying such sanctions are often ineffective. This in turn caused more criticism because Omar is one of two members of Congress to support the boycott, divestment and sanctions campaign against Israel.