Ilhan Omar Just Came Out Against Sanctions. So Why Does She Back BDS? 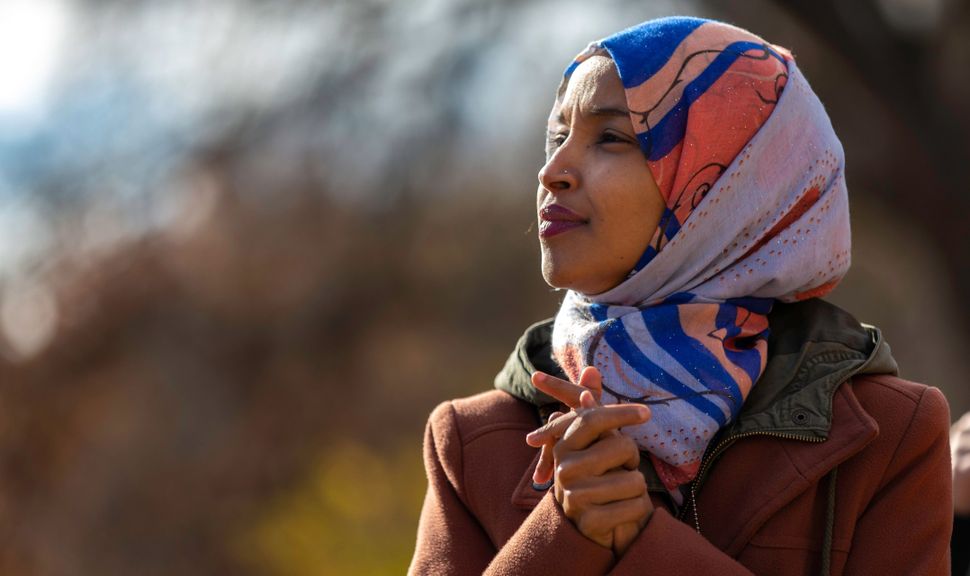 Earlier this week, Minnesota Congresswoman Ilhan Omar wrote a surprising oped in the Washington Post. In it, she broke ranks with the bipartisan coalition seeking to halt Turkey from devastating the people of Syria, and argued — ostensibly opposing but in fact in line with President Trump — that imposing sanctions on Turkey would be a mistake. Sanctions, wrote Omar, are “part of a failed foreign policy playbook,” “ill considered, incoherent, and counterproductive,” and America should “stop relying on them.” “Sanctions rarely achieve their desired goals,” writes the Congresswoman.

The piece was surprising to say the least, and not just because it seems to side with Trump and Turkey against a bipartisan consensus. It’s surprising because Omar was the first U.S. elected official to back sanctions — against Israel. After telling constituents during her election that she does not view the movement to boycott, divest from and sanction Israel, known as BDS, as an effective means of ending the conflict between the Israelis and the Palestinians, Omar did an about face and came out in support of the movement after getting elected.

Sanctions for Israel but no one else seems to be the standard for the Minnesota congresswoman. (She does allow that in the past, sanctions against another country were useful: Apartheid South Africa.)

Indeed, in her op-ed and her reversal on BDS, Omar has dispelled two of the myths about BDS that its proponents love to push: that it’s about ending the conflict, and that it doesn’t single out Israel in a double-standard that’s uniquely focused on Jewish wrongdoing.

Critics of the BDS movement often point out that it singles Israel out for condemnation. They argue that it employs a double standard, blaming Israel for the realities of a decades-long conflict while ignoring true injustice in countries around the world.

In supporting the BDS movement but issuing a general call to action against sanctions, Omar has embodied that double standard, once again proving that she is no friend to the Jews. Having already tweeted that she believes “Israel has hypnotized the world,” and having already engaged in classic anti-Semitic tropes about Jews and money for which she apologized, I can’t help but think of Maya Angelou’s timeless warning: When people show you who they are, believe them.

BDS supporters chafe at the accusation that their movement concerns itself purely with demonizing Israel. Instead, they claim, their movement works to better the lives of Palestinians and to ensure freedom and justice for all. In this framing, they present their activism not as anti-Israel, and certainly not as anti-Semitic, but rather as simply pro-Palestinian.

And yet Omar, a supporter of the movement, acknowledged that BDS may not actually be an effective tool, or at least, that’s what she told her constituents during her primary. When she was asked at a debate held in a synagogue to specify “exactly where you stand” on BDS, Omar said that BDS was “not helpful in getting that two-state solution.”

Once again, Omar has made explicit something that usually goes unsaid: Activists on both sides of the aisle are quick to advocate for policies that reinforce their belief in their own righteousness, but rarely stop to question whether their goals are actually being met by the policies they suggest. The truth on the ground is that no American university has actually divested from Israel. But even if the day comes where that changes, it will make virtually no difference to the Israeli economy. The Palestinian economy, on the other hand, is in many ways vulnerable and easily fractured. The Israeli and Palestinian economies are interwoven, and in practice, the BDS movement is much more likely to damage the Palestinian economy than the Israeli economy.

None of the facts are material in the immediate context of Omar’s duplicity. The Minnesota congresswoman is eager to portray herself as a true progressive, a liberal who seeks to right wrongs around the world, serving the underdog and speaking truth to power.

In reality, she is not an equal opportunity liberal. Some minorities are more worthy of protection in her calculus, some ostensible villains more deserving of condemnation than others.

Nowhere is this more clear than in her recent op-ed, in which she seems exceptionally concerned about the sanctions the U.S. has levied on Iran and Venezuela.

In that same op-ed, she writes that “in the worst-case scenario, [sanctions] hurt the people of a country — generally the very people we’re purporting to help — without making a dent in the country’s behavior.” Omar goes even further, declaring that “in the case of human rights abusers, research suggests that more abuses typically occur with economic sanctions in place than without them.”

I would dispute Omar’s characterization elsewhere of Israel as a human rights abuser, but given that Omar characterizes Israel as such, and clearly expresses in her op-ed that sanctions only embolden those regimes, it is hugely significant that Omar nonetheless supports the BDS movement. As critics of the movement have been noting for years, BDS’s biggest success has not been economic; it has been moral. BDS seeks, above all, to isolate and delegitimize the Jewish state.

And now, Congresswoman Omar has all but admitted that she supports the movement not because she believes it is an effective means to bring about the end to the conflict — she told us she doesn’t think it is — nor because she supports sanctions, or thinks they are productive — she told Washington Post readers that she does not.

So why sanctions only for the Jewish state and no one else?

When people show you who they are, believe them.

Daniella Greenbaum Davis is a Spectator USA Columnist and Senior Contributor to the Federalist. She is the host of Censored in the City, a political podcast.

Ilhan Omar Just Came Out Against Sanctions. So Why Does She Back BDS?