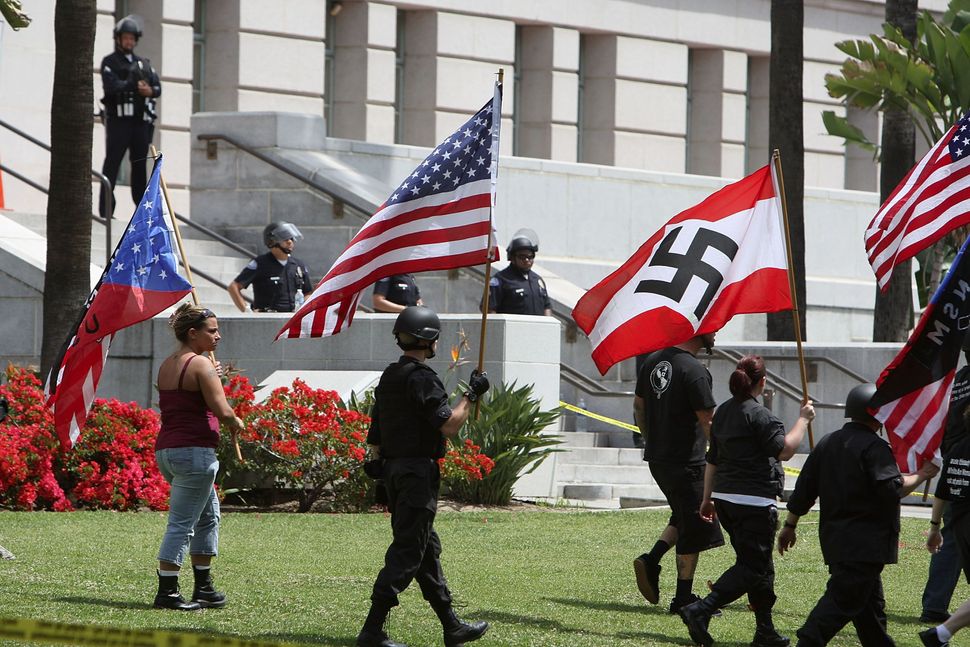 Members of the National Socialist Movement march in front of Los Angeles’ City Hall in 2010. Image by Getty Images

Jewish Americans were once again the religious group most targeted by religiously-motivated bias crimes, the Federal Bureau of Investigation disclosed Tuesday.

In its annual Hate Crime Statistics Act report, the FBI found a slight decrease in the number of hate crimes overall, as well as a similarly small decline in crimes motivated by religious bias. The report listed 7,120 overall incidents, of which 1,617 were motivated by religion. And 57% of those religious hate crimes – 920 overall – were motivated by offenders’ anti-Jewish bias, the FBI said. A record number of anti-Jewish crimes were violent in nature – 105 in total, up from 73 in 2017.

“It is unacceptable that Jews and Jewish institutions continue to be at the center of religion-based hate crime attacks,” ADL CEO Jonathan Greenblatt said in a statement. “We need to take concrete action to address and combat this significant problem.” He urged Congress to pass a bill that would improve hate crime training, prevention and data collection.

The most common hate crimes overall were those attributable to anti-black bias – more than 2,400 in total, 47% of racial incidents and 34% of all incidents.

The report also found that hate crime murders reached a record level of 24 in 2018 – attributable to the 11 people killed in the Tree of Life synagogue shooting in Pittsburgh. Hate crimes against Hispanics and LGBTQ individuals, especially transgender people, also went up last year.

Experts believe that the FBI statistics undercount the actual frequency of hate and bias incidents because their data is based on self-reporting from states and municipalities across the country, each of which have their own definitions of “hate crime” (and some don’t have anti-hate crime laws at all). Indeed, Alabama and Wyoming reported zero hate crimes for 2018.