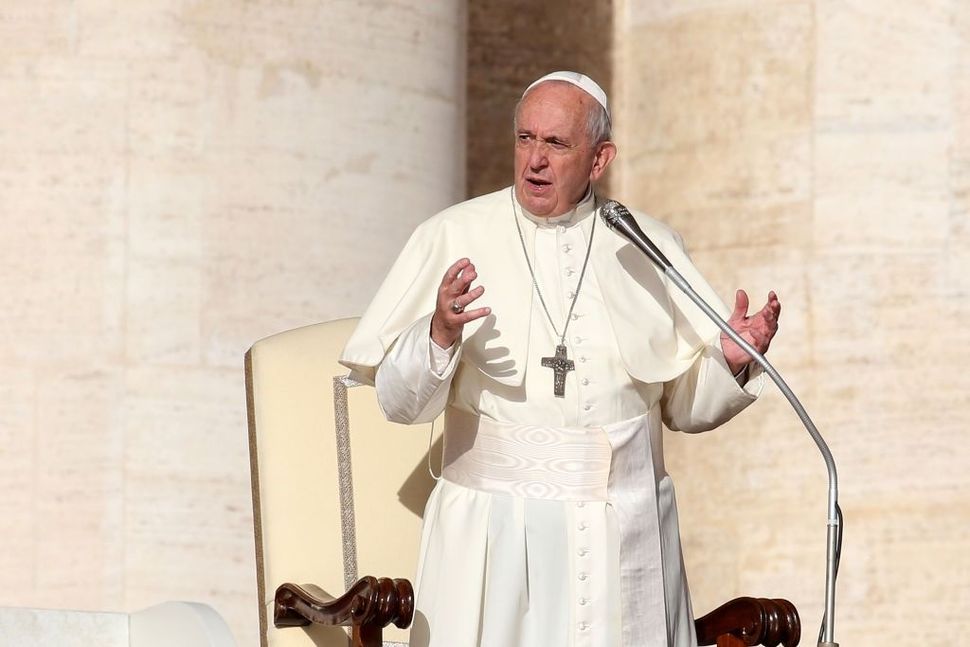 (JTA) — Pope Francis denounced the current rise of anti-Semitism and spoke against new persecutions against Jews.

Speaking Tuesday at the Vatican, the Argentina-born pope improvised his comment outside his prepared remarks at his weekly papal audience.

“I would like to make a separate note. The Jewish people have suffered so much in history, they have been chased away, they, too, have been persecuted,” he said.

Francis, the former Jorge Bergoglio, often recalls his experiences with Jewish friends during his childhood in Buenos Aires. As pope, he has previously spoken against anti-Semitism.

In his remarks Tuesday, he reviewed past Jewish persecutions but warned also about the “rebirth” of hate against the Jews.

“In the last century we saw so many brutalities against the Jewish people, and we were all convinced that this was over,” the pope said. “But today the habit of persecuting the Jews, brothers and sisters, is here reborn. This is neither human nor Christian.”

He concluded: “The Jewish people are our brothers, and they should not be persecuted. Understand?”

The pope, the former archbishop of Buenos Aires, did not refer to any specific incident. His comments were a part of his reflection on the biblical account of the expulsion of the Jewish people from Rome by Emperor Claudius in the first century.

Also this year, the pope sent a letter to the Argentine Jewish political umbrella organization DAIA ahead of the 25th anniversary this month of the attack that killed 85 people at the AMIA Jewish center in Buenos Aires.

“Since the first day,” he wrote, “my heart has been with the relatives of the victims, Jews or Christians.”