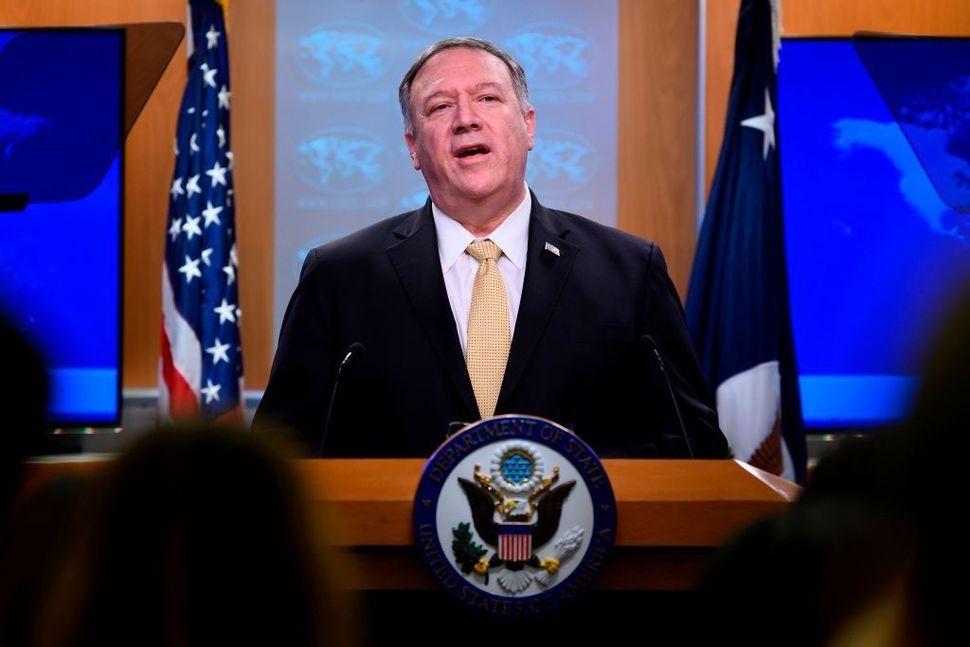 Secretary of State Mike Pompeo makes a statement during a press conference at the State Department building in Washington, DC, on November 18, 2019. Image by JIM WATSON/AFP via Getty Images

The announcement, which was greeted with support from both Israeli government and opposition figures but harshly criticized by Arab leaders, is the latest example of the Trump administration shifting longstanding policies in ways that Israel supports.

The State Department stated in 1978 that settlements were, at minimum, in conflict with legal norms. President Ronald Reagan rebuked that ruling but did not rescind it; subsequent administrations didn’t publicly address the settlements’ legal status at all.

Most other countries call the settlements outright illegal under international law.

Pompeo stated that the new determination, which he said was done by the State Department’s legal team, was “not meant to send a message” for Israel to build more settlements, noting that some of them had been found illegal by Israeli courts.

The secretary also said that the administration’s long-delayed peace plan would be released “when the time is right,” and stated that the legal review was not an attempt to influence Israeli domestic politics. Right-wing Prime Minister Benjamin Netanyahu and centrist opposition leader Benny Gantz are both currently negotiating to try to solve a deadlocked parliament after inconclusive elections.

A senior Israeli official told that Netanyahu had worked with the State Department “for a number of months” on the shift in policy.

Gantz praised the move in a tweet Monday. “I applaud the US government for its important statement, once again demonstrating its firm stance with Israel and its commitment to the security of the Middle East,” he wrote. “The fate of the settlements should be determined by agreements that meet security requirements and promote peace.”

But Ayman Odeh, chair of the Joint List of Arab-Israeli parties, slammed the move. “No foreign minister will change the fact that the settlements were built on the occupied land on which an independent Palestinian state will be established alongside the State of Israel,” he wrote.

Correction, November 20: A previous version of this article claimed that the State Department has stated since 1978 that settlements were inconsistent with international law. While that 1978 ruling had not been revoked as official policy until this week, presidents and Secretaries of State who came into office subsequent to the ruling declined to publicly share their opinions of the settlements’ legal status.