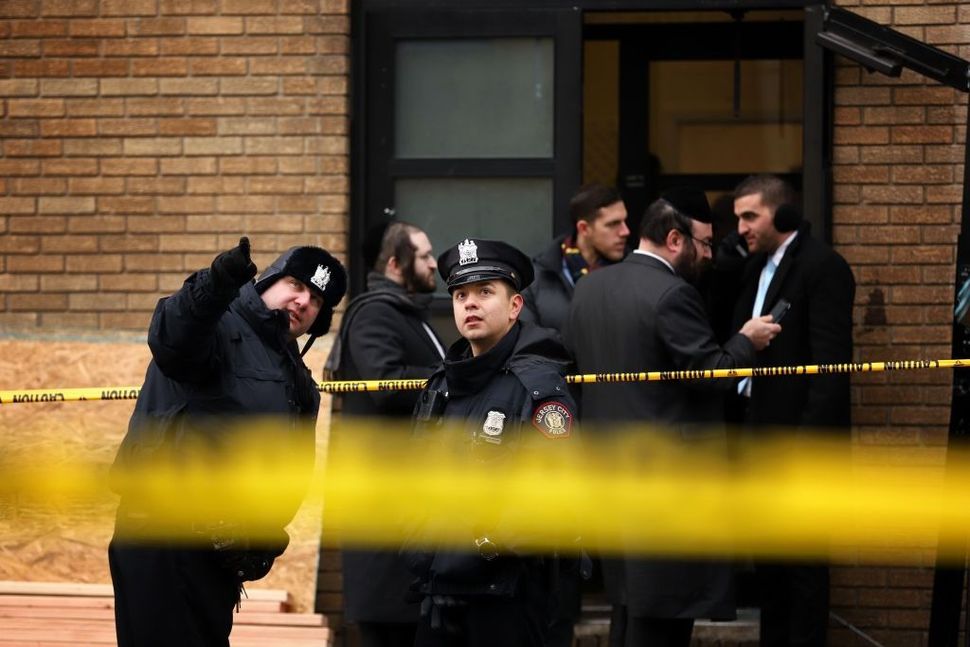 Police officers look at bullet holes in the windows of a school across the street from the JC Kosher Supermarket on December 11, 2019 in Jersey City, New Jersey. Image by Rick Loomis/Getty Images

Neighbors of one of the suspects in the attack on a Jersey City, New Jersey kosher grocery store told reporters that she was a pleasant and friendly person before she began dating the man who allegedly embarked on the shooting spree with her.

Francine Graham worked as a home health aide and lived in the nearby city of Elizabeth, a neighbor in her former condominium complex told The New York Times.

“She was nice, she had a caring nature, she was a standup person,” the neighbor said. Another neighbor told the New York Post that she was “desperate for a boyfriend.”

But after she met David Anderson in 2017, the neighbor told the Times, she underwent a “Jekyll and Hyde” transformation.

Anderson was an Army Reserve fuel and electrical systems repairman from 1999 to 2003, but after he left the service, he was arrested four times between 2003 and 2011, including on weapons possession and probation violation charges, spending more than a year in jail on a 2007 weapons charge. He was also a former adherent of Black Hebrew Israelite ideology, law enforcement sources told local station NBC4.

Neighbors said that after Anderson moved in with Graham, they started hearing both of them conducting loud chanting of religious verses inside the apartment. Anderson reportedly made frequent statements that Judaism and Christianity were false religions, and one neighbor told the Times that he often played recordings of someone that sounded like Nation of Islam leader Louis Farrakhan.

Graham eventually stopped paying her water bill and condo fees and was evicted in 2018, neighbors said. Neighbors said they moved into a van – the same U-Haul that was allegedly used to transport them to the JC Kosher Supermarket, where three people were shot dead. Inside the van, officers found an operational pipe bomb, other weapons, and what authorities described to the Times as as “rambling” manifesto.