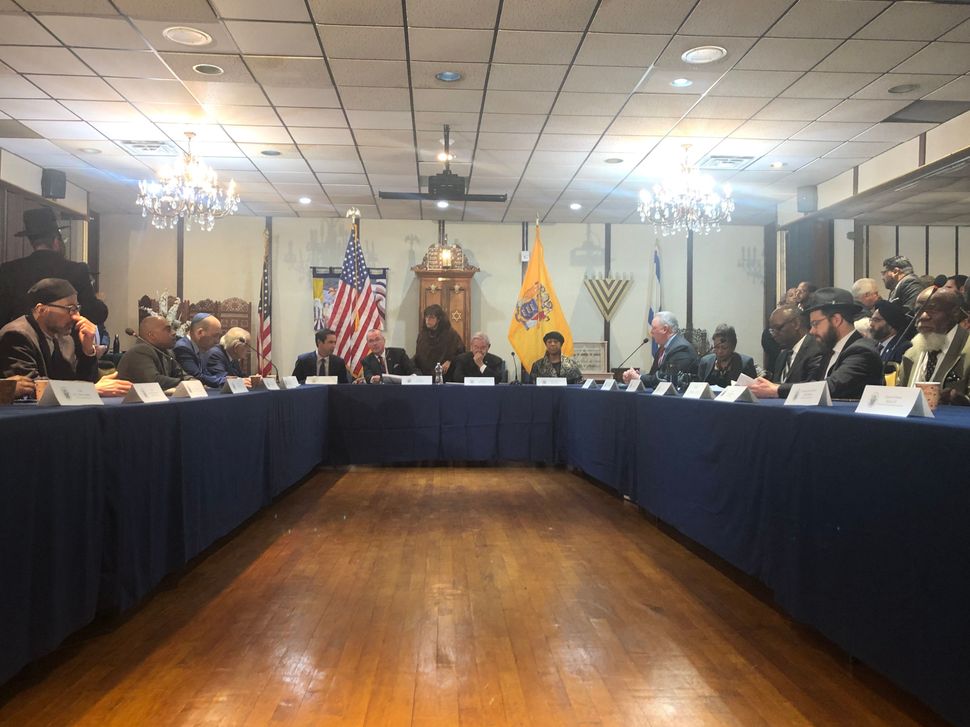 Faith leaders meet at Temple Beth-El in Jersey City on Friday after a shooting at a kosher supermarket earlier in the week. Image by Molly Boigon

Leaders from different faith communities and branches of government met in Jersey City today to talk about the tragic anti-Semitic shooting at a kosher grocery store this week.

Imams, priests, rabbis and elected officials all voiced their sympathies for the victims’ families and called for action, including bias education, to prevent more violence. About 35 faith leaders and public officials met at Temple Beth-El, a reform synagogue in Jersey City — the second-most diverse city in the nation.

“Kids spend most of their day at school,” said Rabbi Moshe Schapiro of Chabad Lubavitch of Hoboken. “If we can start teaching our children that we are not living in a jungle, we can make this world God’s garden, making it a better place.”

The meeting opened and closed with prayers from two different pastors, calling for healing. The governor of New Jersey, Phil Murphy, sat in front of a Torah ark and next to two American flags as he voiced his sorrow over the shooting that killed six people, including three civilians and a police officer, in addition to the two alleged perpetrators. There were statements of solidarity and calls for concrete action, not just thoughts and prayers.

New Jersey Lieutenant Governor Sheila Oliver tried to reassure those present that the two shooters, who took an interest in the Black Hebrew Israelites, did not represent the views of the larger black community.

“I want you to know that in the African-American community, there is respect for the Jewish community,” she said. “You bring a lot to our neighborhoods; you bring a lot of vitality to places all over this state and I want us to walk away, not just today but as we move forward in the future, knowing that you are embraced and loved in the state of New Jersey.”

Elected officials and members of law enforcement spoke about the importance of interfaith dialogue and how “every pastor ought to have a rabbi,” as Steffie Bartley, minister for New Hope Memorial Baptist church, said. Nearly every speaker mentioned the multitude of races, faiths and cultures present in Jersey City, which sits close to both the Statue of Liberty and Ellis Island. In the United States, only Houston is more diverse.

“We Muslims know well, especially post-September 11, what hate means,” said Sheikh Mohammad Alhayek of the North Hudson Islamic Education Center. “It’s our moral obligation and our political responsibility, that we really and sincerely come together on programs, actual programs, and actual initiatives and policies to eradicate this from its roots. We don’t want to wait until the next tragedy happens.”

Bishop Joshua Rodriguez of Cityline Church condemned the national discourse during the tenure of President Donald Trump: “The greatest wall we’ve built over the last several years has not been next to Mexico; it’s been across the country,” he said.