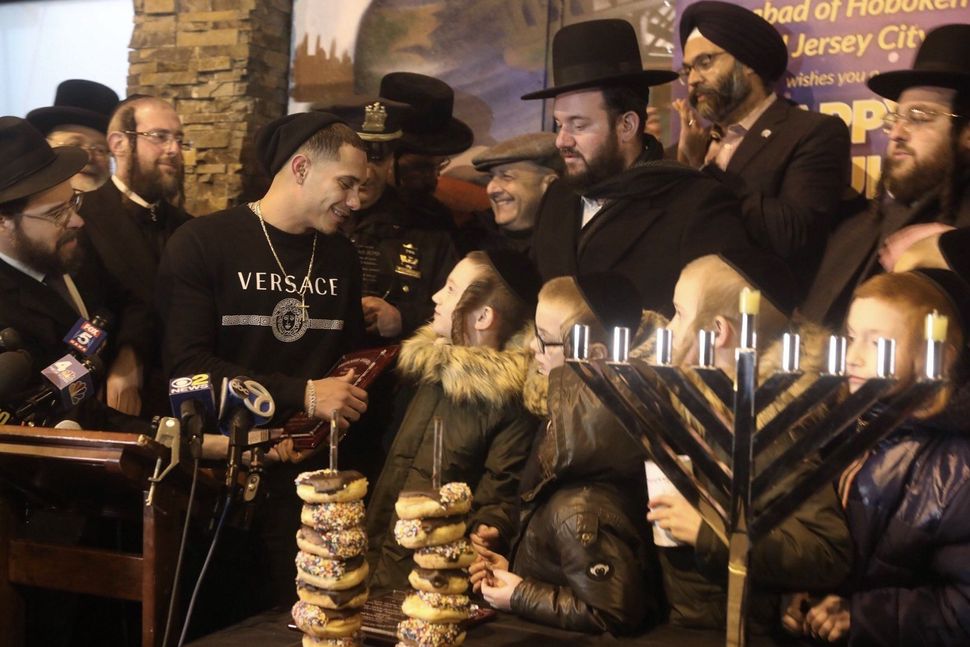 The candle-lighting ceremony in Jersey City Sunday evening, for the first night of Hanukkah. Image by Twitter: Steven Fulop

During the first week of Jewish mourning, called shiva, it is customary to light one candle each day. It burns for 24 hours, and then the next candle is lit.

On Sunday evening, Yoely Greenfeld, the brother of the woman who was killed in the attack on the Jersey City kosher grocery store earlier this month, lit a different candle: The wick for the first night of Hanukkah. Greenfeld’s sister, Mindel Ferencz, was among four people killed by two assailants, in an attack that has shaken the small Hasidic community in Jersey City to its core.

“My sister Mindy was someone who lit up the world with her smile and her beautiful personality, brightening lives both in Brooklyn and in her new home, Jersey City,” Greenfeld said, according to The New York Times. “As we celebrate Hanukkah, may the lives of our candles shine away the darkness, easing the pains of all those who have suffered.”

The candle-lighting ceremony drew Hasidic residents, political figures like New Jersey’s attorney general Gurbir Singh Grewal and Jersey City Mayor Steven Fulop, as well as the members of the Hasidic community who have been helping residents here get back on their feet.

“The first night of Hanukkah at the very place of this shooting, which created so much darkness and negativity, can bring light and positivity,” said Rabbi Moshe Schapiro, leader of the Chabad center in Hoboken and one of the board members for the crowdfunding campaign for the family that operates the grocery store. “When we celebrate at a time like this, almost two weeks from a terrible shooting, we start thinking about what’s the meaning of the holiday.”

Martha Freire Carrasco, widow of Douglas Rodriguez, the grocery store employee who was killed, also attended, holding back tears as she looked at the portrait of Rodriguez in a memorial in front of the storefront. Last week it was only a particle-board facade where flowers and some candles had been laid down. But on Thursday a local street artist covered the facade in a mural. It features three blue hearts, for the three people killed in the store, as well as an image of the Pulaski Skyway bridge.

During the ceremony, children from the school next door to the grocery presented an award to Officer Raymond Sanchez, one of the officers who was injured in response to the shooting. Sanchez reportedly put himself in the line of fire to help people escape the area. Fulop has said that it’s possible the assailants were targeting the school, which is attended by dozens of elementary school-aged students.

Happy Hanukkah to those celebrating.

Just now: #JerseyCity Police Officer Raymond Sanchez, who was wounded when responding to the shooting at a Kosher grocery store, is given an award by the children he protected at a menorah lighting in front of Jersey City Kosher Supermarket pic.twitter.com/47oIb0cIUp