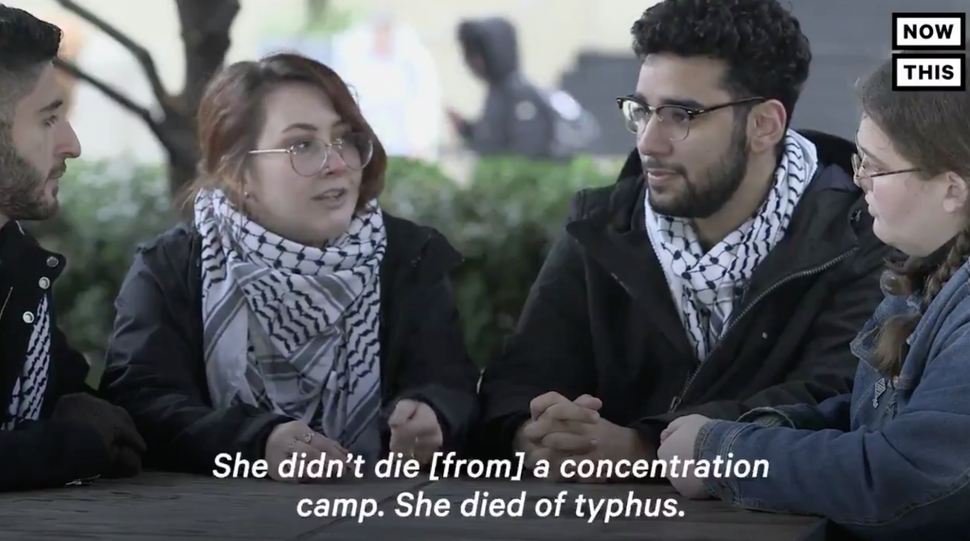 A previous version of a NowThis video featured a student saying Anne Frank did not die in a concentration camp. Image by Twitter/NowThis

(JTA) — The progressive NowThis news website removed a segment of a video in which a student at George Washington University asserted that teenage Holocaust diarist Anne Frank did not die in a concentration camp.

CORRECTION: We have removed a segment of this video in which the speaker misspoke regarding Anne Frank’s death

These Jewish and Palestinian students are speaking out against Trump for equating anti-Zionism with anti-Semitism in his Judaism executive order pic.twitter.com/k6YGsp56h4

The six-minute video about President Donald Trump’s executive order signed last month that directs “robust” enforcement of existing civil rights protections for Jews on campus slammed Trump for “defining what is and what isn’t being Jewish,” and said it was a “veiled way to silence Palestinian voices” against Israel. The order says attackers target Jews since they perceive them to be a race or having a shared national identity,

Senior Becca Lewis, who says she is Jewish, makes the false claim in the video about Anne Frank while speaking with two Palestinian students. They are wearing around their necks black-and-white checkered kaffiyehs, a traditional Arab headdress, which is worn as a symbol of Palestinian nationalism.

“What’s going to happen if there’s another Holocaust? Well, we’re seeing what’s happening. We’re seeing people die at the border for lack of medical care. That’s how Anne Frank died. She didn’t die in a concentration camp, she died from typhus,” Lewis says in the now-deleted video segment. The original video can be seen here.

Frank, in fact, died in the Bergen-Belsen concentration camp in February or March 1945, likely of typhus.

NowThis tweeted a link to the video on Friday, days after the original had been posted, with a message reading: “CORRECTION: We have removed a segment of this video in which the speaker misspoke regarding Anne Frank’s death. These Jewish and Palestinian students are speaking out against Trump for equating anti-Zionism with anti-Semitism in his Judaism executive order.”

Critics called Lewis a Holocaust denier, and said her statement should have been left in order to cast doubt on the veracity of  other statements.