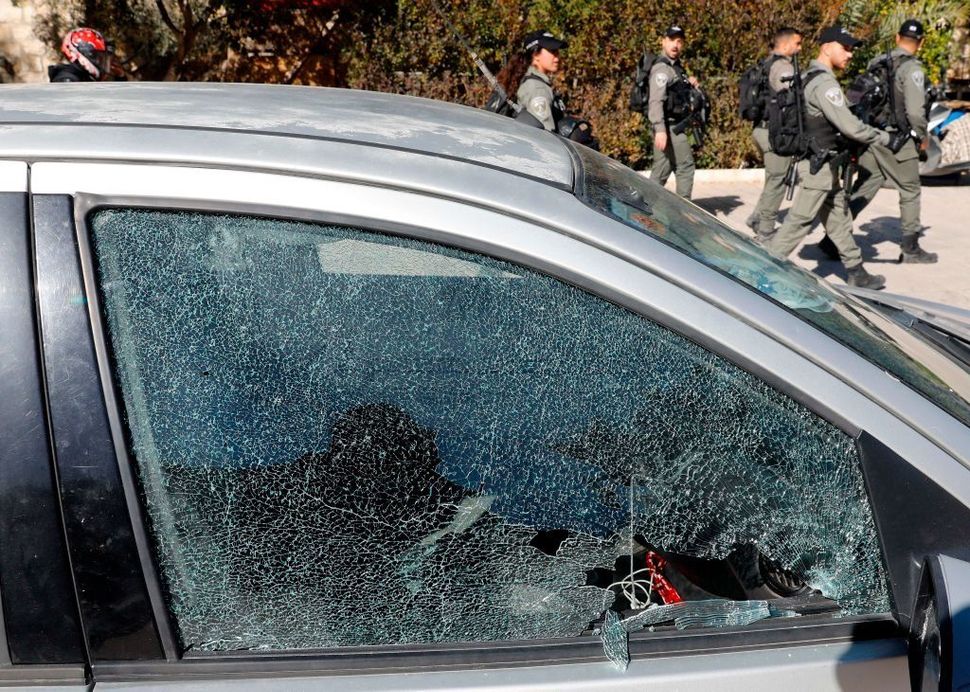 Israeli border guards near walk car damaged during a suspected shooting attack in which an Israeli policeman was lightly injured in Jerusalem’s Old City, on February 6, 2020. Image by AHMAD GHARABLI/AFP via Getty Images

JERUSALEM (JTA) — One of the 12 soldiers injured in the car-ramming attack in Jerusalem last week is a “lone soldier” from San Diego.

Ori Hamond was in Jerusalem with other soldiers for an early-morning swearing-in ceremony to the elite Golani Brigade when the attack took place early Thursday morning next to the popular First Station entertainment center.

Hamond, who was identified Sunday by the Jewish Agency for Israel, made aliyah last year as part of the Israeli Scouts movement and joined the Israel Defense Forces in November. In doing so, he became one of thousands of lone soldiers, IDF members who are serving despite not having grown up in Israel.

On Friday, Jewish Agency Chairman Isaac Herzog met Ori’s mother, Hagit Cohen-Hamo, at the San Diego Jewish Academy, where she teaches Hebrew and where Ori attended school. Herzog offered Cohen-Hamo moral support and the two planted a tree on the grounds of the school joined by students.

Cohen-Hamo said she spoke to her son hours before the attack and had asked him to wear warm clothes to protect him from the cold, never thinking that he would need other protection. She later boarded a plane for Israel to be at her son’s bedside.

On Sunday morning, Ori remained hospitalized in Jerusalem. His father, Kobi, had arrived in Israel prior to the attack in order to surprise his son at his Western Wall swearing-in ceremony and was with him at the hospital.

A crowdfunding campaign set up to raise $1,800 to pay for Cohen-Hamo to travel to Israel was closed after raising $10,000 in about 24 hours.

The post ‘Lone soldier’ from San Diego was among 12 injured in Jerusalem car-ramming attack appeared first on Jewish Telegraphic Agency.