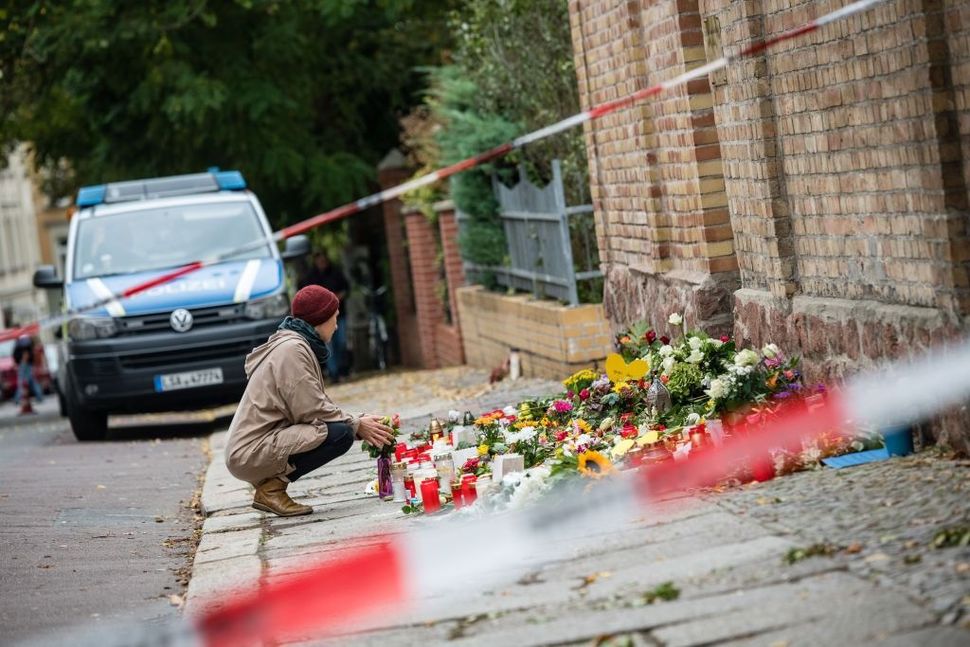 A woman mourns in front of the entrance to the Jewish synagogue two days after a shooting left two people dead on October 11, 2019 in Halle, Germany. Image by Jens Schlueter/Getty Images

BERLIN (JTA) – A surveillance video of the Yom Kippur attack on a synagogue in Halle, Germany, has raised questions about police response and readiness, leading to an investigation by the state government there.

Concerns were triggered after German news organizations examined the synagogue’s security video. The state parliament of Saxony-Anhalt  announced the probe into possible lapses.

About 50 worshippers were in the synagogue when the attack started shortly after noon on Oct. 9. The assailant filmed the attack with his own camera, but the synagogue camera also captured what happened after he left the scene.

Shots are heard in the background as callers to police describe the perpetrator, identified as Stephan Balliet, his car and license plate number. The assailant, wearing combat gear and carrying several firearms, had shot a woman passerby near the synagogue and thrown explosives over an adjacent wall into the Jewish cemetery.

The surveillance video shows that eight minutes passed before the first police car arrives. An officer remains several feet from the prone woman who was shot. No medical personnel appear, and police appear not to be armed or wearing protective gear.

The assailant is seen on the surveillance tape driving past the synagogue for a second time. No one notices.

Following the attack, the head of Germany’s Jewish community questioned why police had not been assigned to protect the synagogue on Yom Kippur.