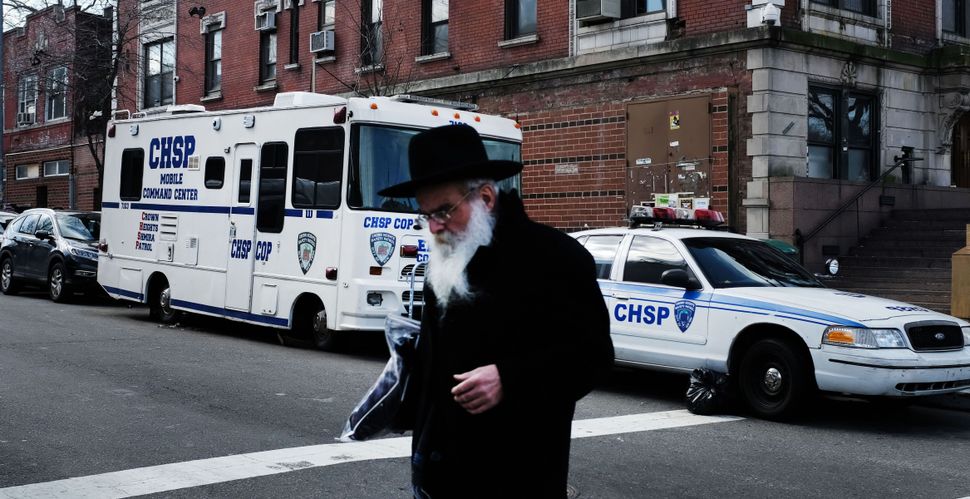 An Orthodox Jewish man walks past a security vehicle in the neighborhood of Crown Heights on February 25, 2019 in New York City. Image by Photo by Spencer Platt/Getty Images

The NYPD will begin to record non-criminal bias incidents in a data tracking system, part of an upgrade of the complaint reporting system discussed in a recent city council hearing.

During a Committee on Public Safety hearing Monday, NYPD Chief of Crime Control Strategies Michael LiPetri indicated that the department will begin recording non-criminal bias incidents in the data system, called CompStat, when asked about how the department factors in bias incidents filed through 311.

“Now when we enter the complaint into the system there will be a checkbox that will trigger a suspected or a motivated hate crime, so that would be a lot easier,” he said. “When you capture data more efficiently obviously the analysis is more efficient.”

“Hate crimes is going to mean a lot of different things to a lot of different people. So, is it swastikas? Is it misdemeanors? Is it felonies? Is it aggravated? Is it somebody received a letter in the mail or is it somebody got attacked on the street? We’re going to proceed cautiously but my commitment is we are going to add that to the CompStat sheet in some form,” he said. “it will probably take I would think probably a few months or so to get the behind the scenes in order but it’s coming.”

CompStat is a system available to the public that allows users to see weekly, monthly and yearly statistics for different offenses across precincts and boroughs.

It is not clear when the new tracking measures will be added to CompStat.