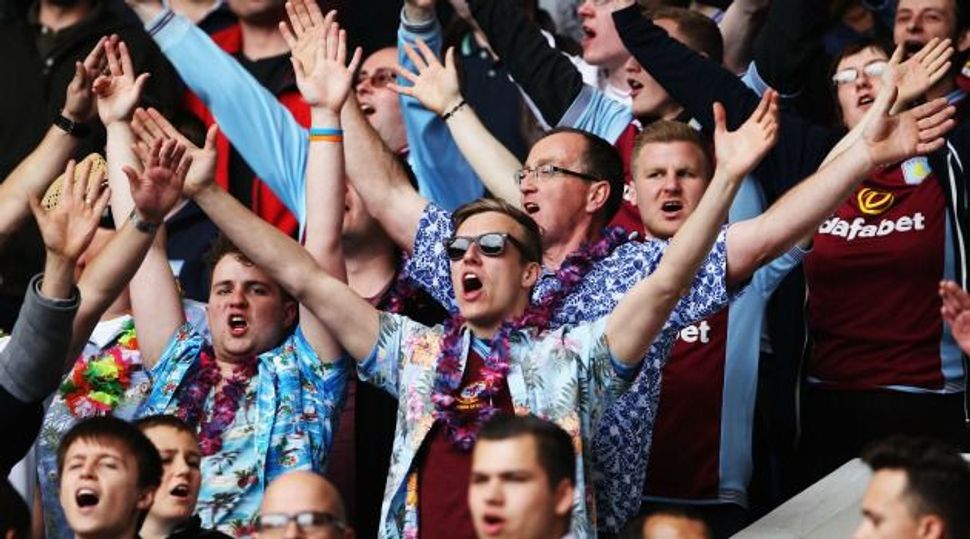 Yid Army: Fans cheer at a recent match between Tottenham Hotspurs and Aston Villa in England. Image by Getty Images

(JTA) — “Yiddo,” a variation of the derogatory term “yid,” is a new entry in the Oxford English Dictionary, which also has added a definition of the latter to describe supporters and players of a British soccer team.

The Tottenham Hotspurs, known as the Spurs, has many Jewish supporters who sometimes call themselves the “yid army.” However, the term is used derogatorily by opposing fans.

The dictionary describes itself as “the definitive record of the English language.”

The definition notes that yid is offensive when used by non-Jewish people to refer to Jews, and is “frequently derogatory and offensive” when referring to Spurs fans or players. The entry for yiddo is defined as “offensive and derogatory,” and notes that the team has been associated with the Jewish community.

A Spurs spokesman told the BBC that “our fans (both Jewish and gentile) have never used the term with any intent to cause offense,” and said the OED “failed to distinguish the contexts in which the term is and is not offensive.”

In 2013, the Football Association warned fans that using the word could result in criminal charges. The British police did not enforce the threat.

The OED in a statement said that it does not police how a word is used.

“We reflect, rather than dictate, how language is used, which means we include words which may be considered sensitive and derogatory. These are always labelled as such,” the statement said, according to the BBC.

Other new words added in the January update include shticky (defined as “Employing or characterized by shticks or gimmicks, especially to an excessive degree; gimmicky, contrived) and awesomesauce (defined as “Extremely good; excellent”).