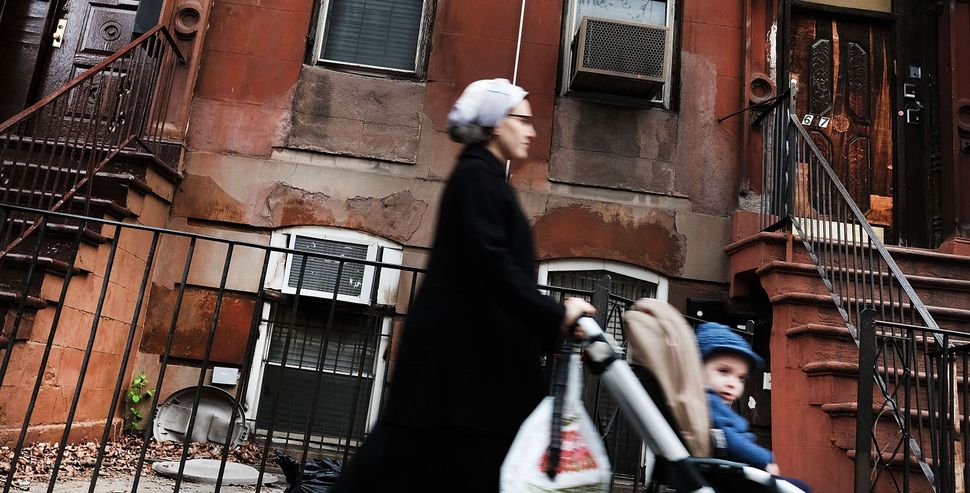 A Hasidic woman walks through a Jewish Orthodox neighborhood in Brooklyn on April 24, 2017 in New York City. Image by Spencer Platt/Getty Images

At least four infants have contracted herpes in New York City in the past six months after undergoing a circumcision rite in which the ritual circumciser, or mohel, cleans the circumcision wound by oral suction.

Three cases of herpes have been reported since December and four since September from the rite called “metzitzah b’peh,” WPIX-11 reported, citing the city’s Health Department.

Here’s a brief reading guide to help explain the practice.

“The spread of neonatal herpes through ritual circumcision is a public health risk,” a Health Department official told WPIX. “To address this risk, we will continue to work with providers and families across our city to keep our youngest New Yorkers safe.”

Adults’ saliva can carry a type of herpes that causes minor symptoms in adults, but potentially serious symptoms in newborns. A herpes infection in a newborn baby can cause brain damage and death.

The custom is rarely practiced outside the haredi, or ultra-Orthodox, community. Other mohels use a sterile pipette for the practice.

It has been a political football in New York City with its large haredi population. In February 2015, the city eliminated a parental consent form mandated by former mayor Michael Bloomberg. The form was replaced with an educational brochure in 2015.

Six families in Williamsburg, Brooklyn, had children contract herpes between 2015 and mid-2017 from metzitzah b’peh. None of the families would give the name of the mohel to the Health Department.

At least 11 boys contracted herpes from the practice between 2004 and 2011. Two died and two suffered brain damage.