A video of the procession in Campo de Criptana, Spain, shows the participants marching in fake Nazi uniforms. Image by Europa Press/YouTube

Editor’s Note: This story has been updated here with a statement from the town’s officials.

(JTA) — At a carnival procession in Spain, participants dressed up like Nazis and Jewish concentration camp prisoners while dancing next to a float evoking crematoria.

The Israeli embassy in Madrid on Tuesday protested the display this weekend at the annual carnival procession in Campo de Criptana, a town situated about 80 miles southeast of the capital. 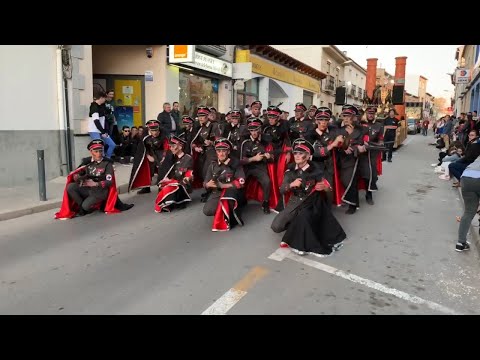 “We condemn the vile and repugnant representation that disrespects the victims of the Holocaust,” the embassy wrote on Twitter, “making fun of the murder of millions of Jews by the Nazis. European nations must collectively fight anti-Semitism.”

Get the latest Jewish headlines delivered to your inbox, signup for our daily newsletter here.

A video of the procession shows the participants who were wearing fake Nazi uniform marching. Behind them, dancers wearing striped outfits evoking concentration camp uniform followed while waving flags of Israel. They were followed by the float shaped like a train locomotive with two large chimneys.

On Sunday, a carnival procession in Aalst, Belgium featured costumes of haredi Orthodox Jews depicted as ants. Dozens of other participants wore fake hooked noses. One group of participants wore shiny black uniforms and red arm bands evocative of Nazi uniforms. A third group dressed as Jews carried a sign that warned readers “not to tell the truth about the Jew.”

Last year, UNESCO dropped the Aalst Carnival from its list of world heritage events over an earlier depiction of Jews in the 2019 procession.

It featured a float with effigies of grinning haredi Jews holding bags of money. One of the effigies had a rat on its shoulders. The group that created the float said it was meant to protest the rising cost of living.