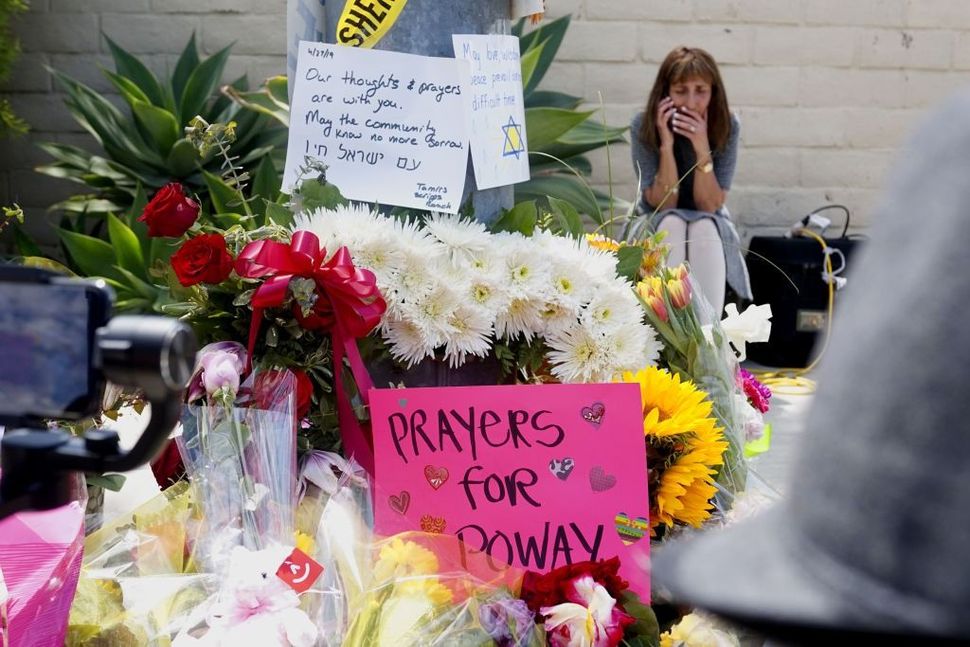 A make-shift memorial sits across the street from the Chabad of Poway Synagogue on Sunday, April 28, 2019 in Poway, California, one day after a teenage gunman opened fire, killing one person and injuring three others including the rabbi as worshippers marked the final day of Passover, authorities said. - The shooting in the town of Poway, north of San Diego, came exactly six months after a white supremacist killed 11 people at Pittsburgh’s Tree of Life synagogue — the deadliest attack on the Jewish community in US history. (Photo by SANDY HUFFAKER / AFP) (Photo credit should read SANDY HUFFAKER/AFP/Getty Images) Image by Getty Images

(JTA) — Domestic extremists in the United States — most them from the far-right — killed 435 people in the decade that ended this past December.

According to a new study by the Anti-Defamation League, half of those murders were committed to further the killer’s ideology. The other half were murders that were committed by extremists but not necessarily for ideological reasons.

The report defines domestic extremists as “American citizens or long-term residents with connections to some sort of extreme movement or cause.”

According to the ADL, 90% of those extremist murderers this year came from the right. But the report noted that because right-wing extremists tend to be easily identifiable, it is “likely that non-ideological murders committed by extremists other than white supremacists are underrepresented in ADL’s data.”

In terms of ideologically-motivated killings, 2019 was the third-worst year of the past decade, with 29 ideologically motivated murders by extremists. Those include 22 people killed by a white supremacist shooter at a Walmart in El Paso, four people killed in a December shooting that ended at a Jersey City kosher supermarket, and the synagogue shooting in Poway, California, in which one woman was killed.

“[E]xtremist killings can have a disproportionate effect on communities, especially when they take the form of a hate crime or a terrorist attack,” read the report. “It is important to remember that extremist murders represent merely the tip of a pyramid of extremist violence in the United States.”

The deadliest year of the past decade in terms of domestic ideologically motivated murders was 2016, which saw 58 such murders. That includes the mass shooting at the Pulse nightclub in Orlando, which was carried out by an Islamist extremist and killed 49 people.