Israeli elections: Netanyahu and Gantz are neck and neck (again) 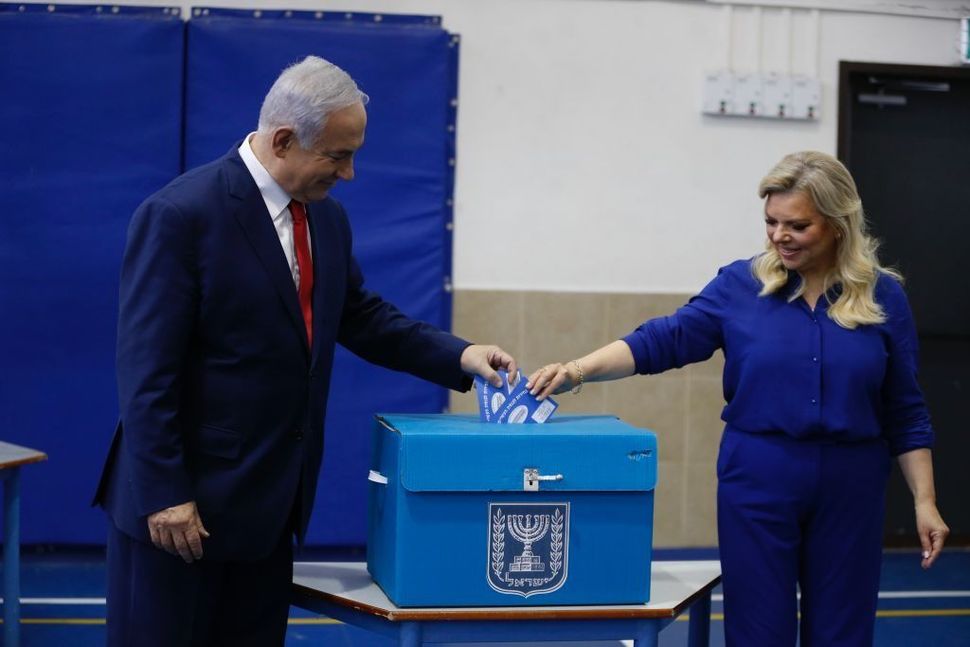 Israeli Prime Minister Benjamin Netanyahu and his wife Sara cast their votes during Israel’s parliamentary elections in Jerusalem, on April 9, 2019. - Israelis voted today in a high-stakes election that will decide whether to extend Prime Minister Benjamin Netanyahu’s long right-wing tenure despite corruption allegations or to replace him with an ex-military chief new to politics. (Photo by Ariel Schalit / POOL / AFP) (Photo credit should read ARIEL SCHALIT/AFP/Getty Images) Image by Getty Images

JERUSALEM (JTA) — The final Israeli television news polls offered no surprises as the country gets set to hold its unprecedented third election in a year on Monday: The Likud party and Blue and White are running neck and neck.

The two parties finished atop the voting in the two elections held last year, in April and September.

Likud, led by Prime Minister Benjamin Netanyahu, is polling at 33-35 seats in surveys conducted Thursday and Friday by the Kan public broadcaster, Channel 12 News and Channel 13 News. Blue and White, headed by former military chief of staff Benny Gantz, had 33-34.

Neither the right-wing nor left-wing blocs have been able to form a coalition government of more than 60 seats without either Yisrael Beiteinu or the Joint List, which has never been part of an Israeli government.

At least a dozen special polling places will be opened throughout the country to allow those in self-quarantine due to possible exposure to the coronavirus. About 5,600 citizens who have registered their quarantine with the Health Ministry will have the special arrangements, according to the ministry.

The quarantined voters have been instructed to drive directly to the special polls, cast their ballots and return home without making any stops.

Meanwhile, the ministry assured voters that polling stations are safe and that it is not risky to vote.

“The situation is under control,” Moshe Bar Siman-Tov, director-general of the Health Ministry said in a statement. “Everyone who was infected with the coronavirus, we know where they were infected and this is important that it’s safe to go vote. Don’t hesitate, go vote.”

Israeli elections: Netanyahu and Gantz are neck and neck (again)