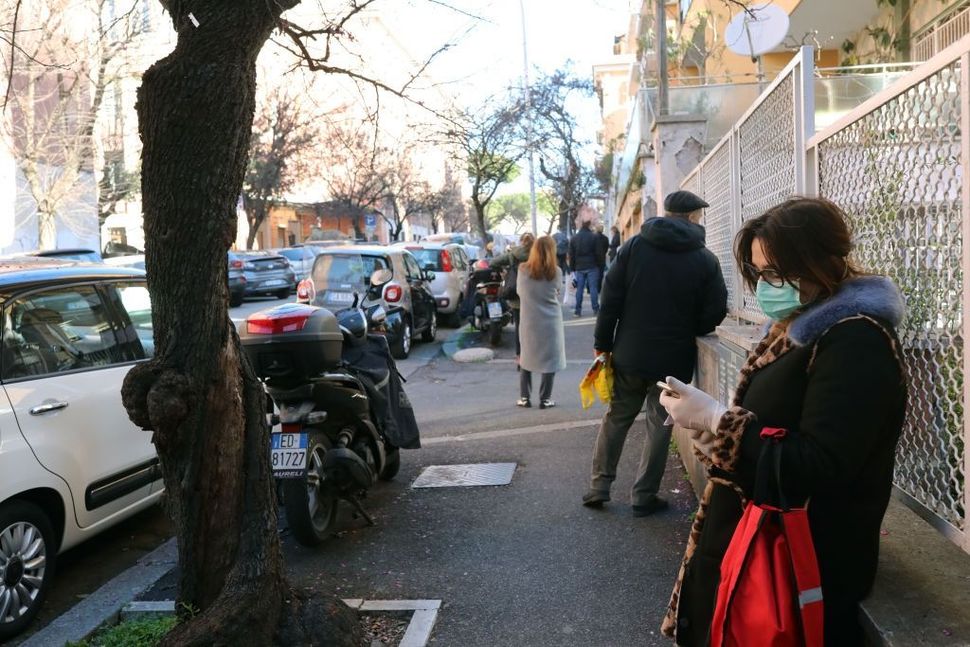 Supermarket customers are lined up waiting to enter a meter away from each other in the Monteverde Vecchio neighborhood on March 12, 2020 in Rome, Italy. Image by Marco Di Lauro/Getty Images

(JTA) — Rome’s Jewish community is in a “state of complete uncertainty” amid Italy’s coronavirus crisis, according to its president.

“We are a proud and ancient community in the midst of the worst situation we have faced since World War II,” the president of Rome’s Jewish community, Ruth Durgello, said in a press release distributed by the Jewish Agency for Israel, which is preparing to deliver aid to Jewish communities in Italy and beyond that are hard-hit by the coronavirus.

“We are in a state of complete uncertainty,” Durgello said. “We are trying to stabilize the situation but there is tremendous anxiety here about the danger of a complete collapse. General morale is very low. We know there is light at the end of the tunnel, but we don’t know how long the tunnel is.”

Italy has implemented a state of almost total lockdown, keeping only supermarkets and pharmacies open while asking people to stay at home as much as possible. The containment measures are having deep effects on the country’s Jews, who number about 30,000, in part because many of them have relatives in Israel and cannot see each other during this crisis.

As of Wednesday night, more than 12,000 cases of coronavirus had been recorded in Italy, and more than 800 people had died.

The Jewish Agency is collaborating with the Italian community to identify and meet its needs to the extent possible. Chairman Isaac Herzog told the Israeli press that he has had “emotional conversations” with Jewish leaders in Italy and was urging other Jewish organizations to figure out how to help Italian Jews.

Italy’s Jewish community is “small and comprised of a relatively large number of elderly people who are encountering a challenge the likes of which they have not faced since the Holocaust,” Herzog said.

He added, “We have set up a special team to immediately analyze their most urgent needs, and together with Keren Hayesod we will work to help the community as quickly as possible. I urge our parallel Jewish organizations and Jewish communities worldwide to mobilize, given the extent of the need.”

The post ‘The worst situation we have faced since World War II’: Rome’s Jewish community responds to the coronavirus appeared first on Jewish Telegraphic Agency.