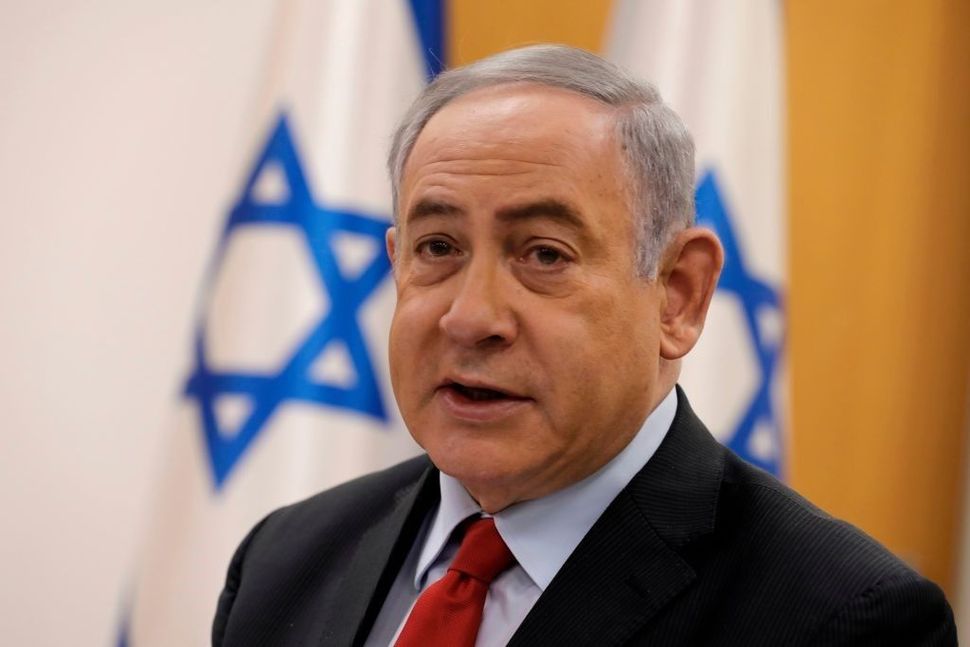 Israeli Prime Minister Benjamin Netanyahu holds a video conference with European leaders in order to discuss challenges and cooperation between various countries in dealing with COVID-19 coronavirus, at the Foreign Ministry in Jerusalem on March 9, 2020. Image by MENAHEM KAHANA/AFP via Getty Images

Israeli Prime Minister Benjamin Netanyahu’s trial in three corruption cases has been postponed by over two months, a district court announced on Sunday.

The trial was set to begin on Tuesday. It has now been pushed back to May 24.

In the very early hours of Sunday, Israeli Justice Minister Amir Ohana announced that emergency measures will be put in place to counter the spread of coronavirus, affecting the workings of Israel’s courts.

According to the announcement, court activity will be frozen except for urgent hearings. The instructions were given four hours after a press conference at which the Prime Minister and representatives of Israel’s executive presented a new slate of emergency measures to curb the spread of the novel coronavirus. Netanyahu did not address court activities.

A justice ministry spokesperson said the measure was taken “as part of the national effort to prevent the spread of the coronavirus … in accordance with the recommendations of Health Ministry staff, and in coordination with the courts administration and the Attorney General.”

The courts will work according to an emergency format, and will only discuss cases of extension and release of bail, and administrative detention – detention without trial used mostly in security-related cases. Petitions to the High Court, and civilian matters will be delayed.

Non-urgent hearings will be canceled until the end of the emergency. In case a decision is made to extend the validity of the emergency, “the court administrator intends to use the authority given to him in Rule 3(e) of [emergency] regulations to determine other types of matters to be heard in the courts.”

On Thursday, Amir Ohana, a close ally of Netanyahu, expanded his powers to freeze court activity in case of escalation in coronavirus cases in Israel. Rules so far only allowed a justice minister to freeze the activity of the courts for security reasons only. With the signing of the new regulation, Ohana could use his powers to do so on grounds of natural and public health.

Following the Ohana announcement, the Movement for Quality Government urged the Attorney General to stay the new regulations. “This is a temporary minister in a temporary government that has never received the public’s trust,” the organization said.

This comes days after Jerusalem’s District Court rejected a request by Netanyahu’s defense team to delay his trial by 45 days, on the grounds that they did not receive the full investigation materials.

During his Saturday press conference, the prime minister unveiled a series of drastic new measures to deal with the COVID-19 outbreak in Israel, including shuttering non-essential businesses and using counter-terror tech to track the spread of the virus.

The prime minister called the novel coronavirus an “invisible enemy,” and said “all means would be used to fight the spread of the coronavirus, including technological means, digital means, and other means that until today I have refrained from using among the civilian population.”