What U.S. Jews can learn from Italy’s Jewish response to coronavirus 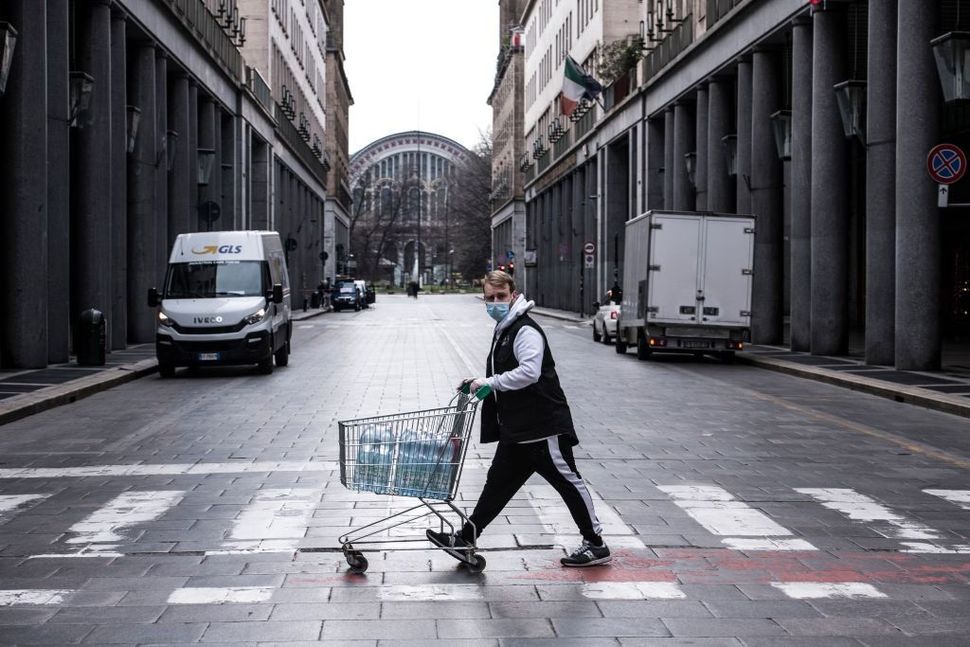 A man with a mask with a shopping cart in the deserted Via Roma in Turin, Italy. Image by Stefano Guidi/Getty Images

NEW YORK (JTA) — The Italian people’s first reaction to the coronavirus was to have a good laugh. Not because they didn’t believe the virus was a real issue, but because that’s just how we like to process big changes in my home country.

By Feb. 23, there were 152 confirmed cases in Italy. Yet many people were still skeptical, assuming the virus was probably no different than the regular flu.

Thousands of original, hilarious jokes, cartoons and self-deprecating memes regarding the virus started circulating online. We all took part in the game.

“The first cookies one meter away from each other,” read the meme, referring to the government’s disposition to maintain a distance of at least one meter (3 feet) from other people to avoid getting infected.

Had the Italian government not stepped in, many Italians would still be out and about having an “aperitivo” with their friends, unbothered by the pandemic. By assuming the virus will hit the United States just as hard, we can learn from the steps taken — and the mistakes made — in my home community, and enact similar preventive measures, even if the virus has still to hit all of our own communities, schools or synagogues.

Beginning on Feb. 21, when there were only 20 confirmed cases in the country***, ***the Italian government started enforcing very strict measures of self-isolation and social distancing. Prime Minister Giuseppe Conte urged the Italian people: “Let’s stay distant from each other today, so that we can hug each other with even more warmth tomorrow.”

Life in my home country has changed drastically. Italians now love to use the English verb “smart working” (working from home); young people organize large virtual gatherings on Zoom and FaceTime to compensate for the lack of social life.

My father, who is a rabbi, traveled to Milan for work — as he does every week — during the last week of February for the last time. He described the city as a “ghost town.” Milan is the pulse of the country, the heart of the wealthy northern region of Lombardy, and possibly the most liberal, fast-paced and international city in Italy. It was a shock for him to see the city on its knees — quiet and empty as he’d never seen it before. This is how cities like New York and Seattle might look like in a couple of weeks.

On Purim day, synagogues all over Italy were forced to close down. In cities like my hometown, Turin, there was no morning reading of the Megillat Esther at the local synagogue. Communities organized livestreamings so that everyone could hear it from home. The Conference of European Rabbis told congregants to stop touching and kissing Torah scrolls and mezuzot.

Schools and universities shut down, first in the north in late February, then by the first week of March all over the country. Some mocked government measures, calling them draconian, but many others started panicking and raided local supermarkets. A flood of fake news started invading social media and group chats. One said, “Tonight, starting from 11 p.m., helicopters will fly over the city to throw disinfectant all over; if you have any laundry hanging outside, move it indoors.” (Yes, some people actually believed it.)

As of this writing, Italy is in a total lockdown, with more than 27,000 confirmed cases and over 2,100 deaths. Only pharmacies, supermarkets, laundromats and newsstands were allowed to remain open for business.

My father now holds all of his classes via Skype. Many people who had never participated in a video call before are now quickly catching up and learning more about technology because they desperately need it in order to continue living as normally as possible.

The lockdown is especially hard for people like my sister: She is at home with her young kids, who would love to go to school and kindergarten, go to the playground or organize a play date with their friends, but can’t. It’s also hard for those who have older loved ones living in nursing homes because they have not been allowed to visit them for weeks. Who knows how much longer they won’t be able to meet?

And now, the coronavirus is hitting the United States.

But despite having a major advantage over other countries in terms of time, the United States seems to be far from prepared to face the pandemic. Testing has been embarrassingly limited here — until last week, the U.S. had been testing about 80 times less than Israel and 160 times less than Italy.

The federal government took a long time to take the threat seriously enough. Until a few days before declaring a national emergency, the president had been repeating the virus was “just a flu.” It will be gone, he said, “within a couple of days,” and advocated for “business as usual.” Over the weekend, people were still crowding bars and restaurants in New York City, appearing largely unbothered; public schools are still open in many cities.

I don’t think the American people have some special antibodies that the Italian people lack. The U.S. health system is not particularly more advanced, nor does it have more hospital beds per capita. The point is, the virus doesn’t discriminate; it can hit anyone. And even if it doesn’t affect you personally because you’re young and in good health, by contracting COVID-19 and spreading it around, you could kill an older person or someone with medical issues, such as an immunocompromised individual.

Social distancing has proven to be one of the most effective ways to contain the virus. The philosophy of waiting for one case to emerge in one community before shutting everything down is shortsighted, since that one case is most likely connected to multiple others.

Some of my friends think I’m an alarmist; I’m not. Panicking is not the answer; reacting responsibly is. I am simply basing my thoughts on what I’ve already seen happen elsewhere.

In response to the lockdown, the local Jewish communities in Italy have organized a series of ongoing virtual classes taught live by a rotation of more than 10 rabbis from various cities. Hundreds of people have been attending the sessions each day. Given the size of the local community, it’s a remarkable achievement.

Canceling every social gathering, working from home when possible, closing down schools and testing aggressively are probably the best weapons we have against the virus at the moment. We have an advantage that Italy didn’t have — time. But if we don’t take appropriate measures, it’s likely that what is happening in Italy today will be happening in the United States in two or three weeks.

Let’s join forces to make sure it doesn’t.

The post What American Jews can learn from my Italian Jewish community’s response to the coronavirus appeared first on Jewish Telegraphic Agency.

What U.S. Jews can learn from Italy’s Jewish response to coronavirus