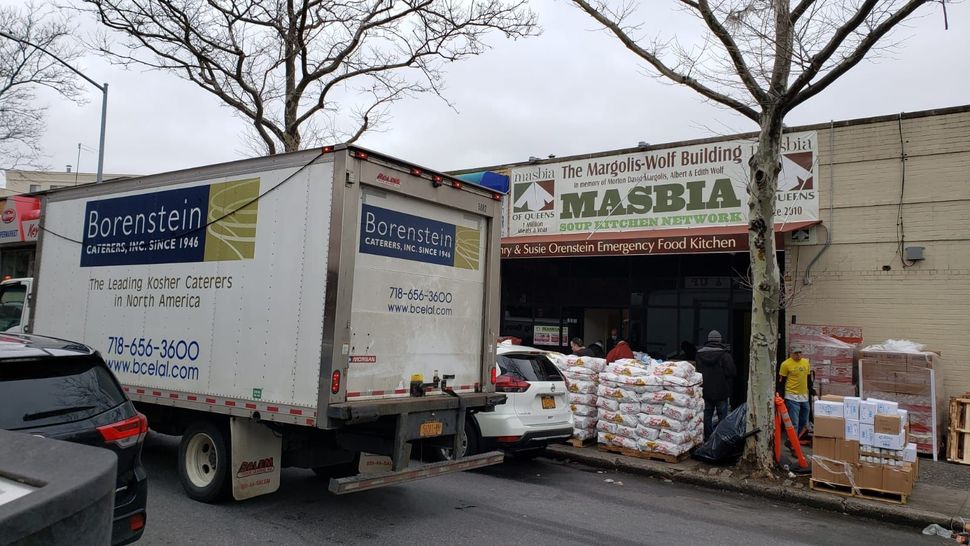 A delivery of in-flight meals arrives at Masbia food pantry. Image by Courtesy of Alexander Rapaport

For kosher food pantries, Passover is already the busiest time of year, a time when many Jewish New Yorkers need help procuring the pricey food that meets the holiday’s dietary restrictions.

But this Passover is unlike any other. As coronavirus takes its toll on family finances, food pantries stretching supplies of kosher-for-Passover food to serve a rapidly-expanding clientele.

Rapaport first learned about the surplus meals through a contact at the OU Kosher Certification Agency, which certifies both Masbia’s and Borenstein’s premises. With travel severely curtailed by the virus, El Al could no longer use the meals it had ordered months ago. The contact saw an opportunity for Masbia to help Borenstein avoid a financial loss while meeting rising demand for its own services.

“They were trying to be nice to [Borenstein] and nice to us by making this shidduch,” Rapaport said, playing on the name for the Orthodox Jewish practice of arranging marriages.

The meals range from breakfast omelets to chicken with potatoes. Rapaport said they are especially convenient for elderly people who have been unable to kasher their homes, or complete the ritual preparations for Passover that include removing all leavened grains from the house and thoroughly cleaning appliances. Because the meals are double-wrapped, they can be heated in an oven that isn’t kosher for Passover without becoming halachically contaminated themselves.

Sam Levy, Head of Sales and Customer Relations at Borenstein, said that while airplanes are grounded the caterer is marketing its products to hospitals and other community organizations, and will continue to do so in the weeks to come.

“It’s not just for Passover,” he said.

Irene Connelly is an editorial fellow at the Forward. You can contact her at connelly@forward.com.