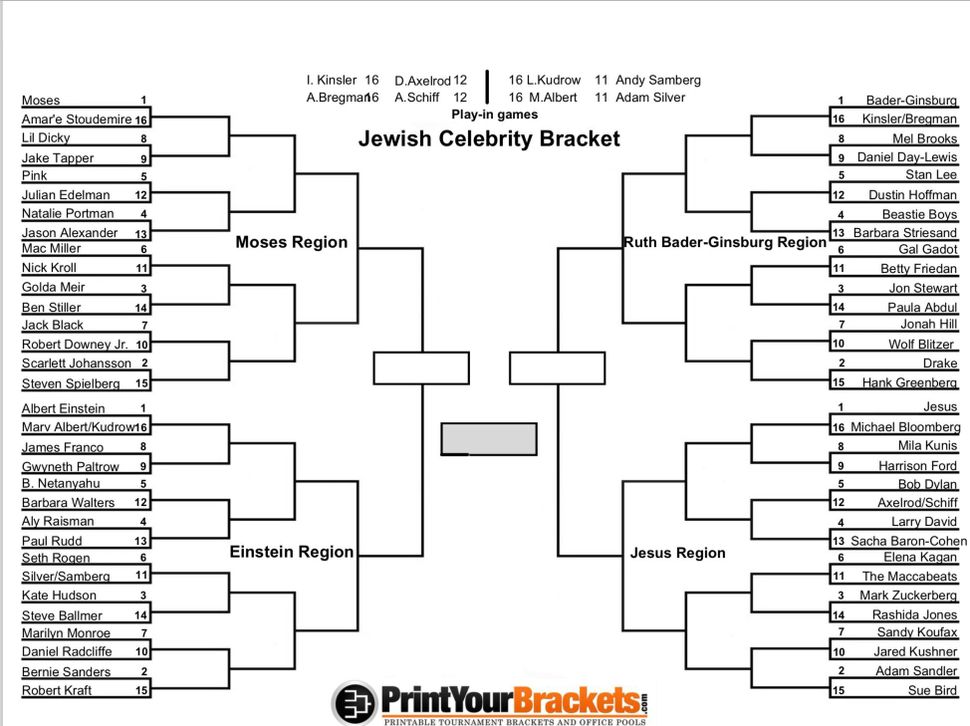 Which Jewish celeb will come out on top? Image by University of Missouri Hillel

With March Madness cancelled by coronavirus, Jewish basketball aficionados lost the chance to cheer underdog qualifier Yeshiva University through the championships. But you can still engage in Jewish bracket betting.

On Thursday, homebound members of the University of Missouri Hillel took to Twitter to create a virtual tournament of famous Jews from all time periods and walks of life. Anyone with a Twitter account can participate via a series of polls on the social media platform.

In honor of a cancelled March Madness, we decided to create our own bracket of famous Jewish people. Pick your favorite or make the bracket in your own way. Each week, there will be a thread of Twitter polls and the winner will advance. We begin with the play-in games. pic.twitter.com/CR6Now2P3W

And some of the theoretical combatants have already weighed in.

“This is amazing,” commented Lil Dicky, a Jewish rapper known for his 2013 music video “Ex-Boyfriend.”

News anchor Jake Tapper, scheduled to “compete” against him in the first round of the bracket, replied, “I’m coming for you.”

Meanwhile, others were discovering hitherto-unknown members of the tribe. “Harrison Ford is Jewish?” commented one user, who needs to listen to Adam Sandler’s “Eight Crazy Nights” Hanukkah song, lyrics here.

As of Thursday afternoon, thousands of Twitter users had cast their votes in the first four games. In one of them, Israeli baseball player Ian Kinsler edged ahead of his American counterpart Alex Bregman.

But whoever wins that match will face a nigh-invincible opponent in the next round: Ruth Bader Ginsburg.