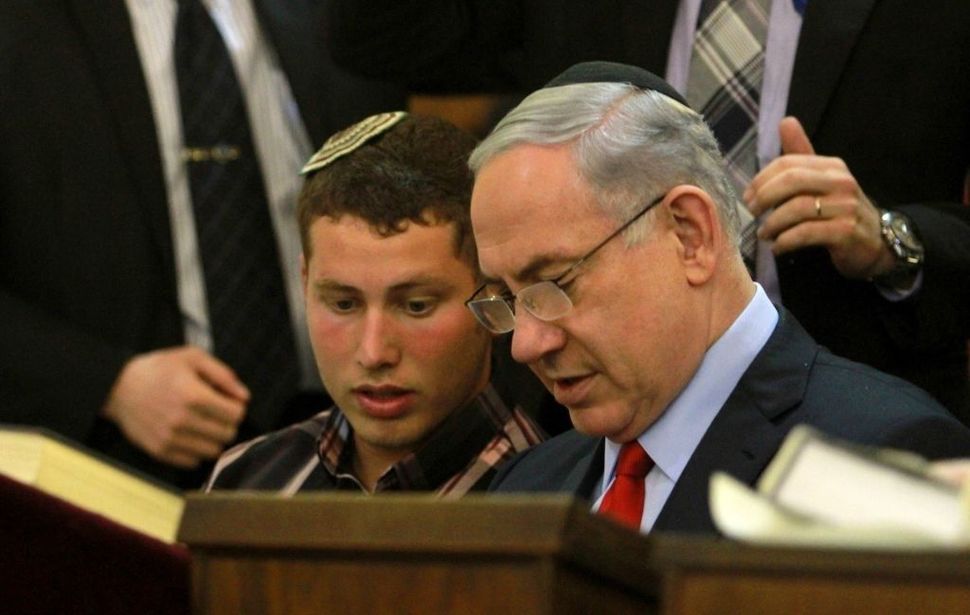 Israeli Prime Minister Benjamin Netanyahu and his son Avner read the book of Esther at Jerusalem’s Great Synagogue on March 5, 2015 during the holiday of Purim. Image by GIL COHEN-MAGEN/AFP via Getty Images

Israel’s prime minister and president were criticized on social media Thursday for having Passover Seders with children who live outside their home – despite strict quarantine measures that banned such gatherings.

The Israeli government ordered Jewish citizens to stay in their homes with no exceptions from Wednesday afternoon to Thursday morning, in order to stop people from visiting family during the Passover Seder. The restrictions were on top of existing measures that forbade traveling more than 100 meters from home except for essential trips like grocery shopping.

But when Israel’s Channel 12 showed a video clip of Prime Minister Benjamin Netanyahu’s family Seder, viewers noticed that the gathering included his son Avner – who lives near the prime minister’s official residence, but not in the building.

Thread: #SocialMedia has been on fire since last night due to the perceived #LedershipFailure of @netanyahu that appeared together with his son Avner in a @N12News special #Passover2020 #COVID19 broadcast. 1/5 pic.twitter.com/lxte89VJNY

Even people who served under Netanyahu were upset.

“Share an explanation of why this might be OK,” tweeted Arthur Lenk, Netanyahu’s former ambassador to South Africa. “After demanding from all of us to #StayAtHome and not have kids/parents come to our sedars, Bibi had his son join him and his wife (and live-in other son) last night.”

According to The Jerusalem Post, sources close to Netanyahu, who is 70, released an announcement that attempted to do damage control, “saying that there was no wrongdoing on the Netanyahu’s part, as Avner lives nearby, has spent many hours at the official residence, and abides by the Health Ministry regulations.”

Separately, Israeli President Reuven Rivlin issued an apology on Friday after admitting that he held a Seder with his daughter, her partner and their two children.

Rivlin, who is 80 and lost his wife Nechama to pulmonary fibrosis less than a year ago, said that he understood the criticism he had received.

“Since Nechama passed away, my children have been assisting me a lot in my personal business, as well being my contacts in work-related needs during the holidays and weekends when my office is not staffed,” he said in a statement. “I understand that if people do not understand the agenda as a president, it is difficult to understand this and I am sorry for that.”