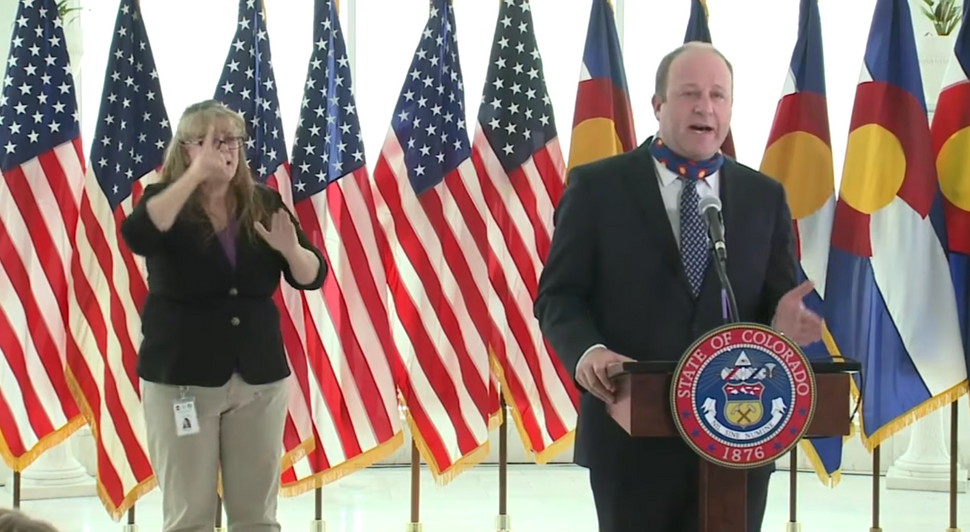 (JTA) — Colorado Gov. Jared Polis became emotional during a news briefing about the coronavirus crisis in his state when a reporter said that the public has compared his stay-at-home order to Nazism.

“As a Jewish American who lost family in the Holocaust, I’m offended by any comparison to Nazism,” Polis said Wednesday during his briefing in Denver. “We act to save lives. The exact opposite of the slaughter of 6 million Jews and many gypsies and Catholics and gays and lesbians and Russians and so many others.”

His voice cracked and tears welled up in his eyes as he responded to the question.

Polis, a Democrat elected in 2018, is Colorado’s first Jewish governor, and was the first openly gay man elected governor of a state.

“We’re hearing a lot of reports around here,” the reporter said, “and I know I’ve seen some stuff going on statewide about neighbors reporting on other neighbors for not following the orders, seeing a lot of rebellion out here against your orders, which have been called tyrannical, against local health department orders, being equated to Nazism. How do you react to that? What do you say to those people who are clearly getting frustrated with this stay-at-home order?”

Colorado House Minority Leader Patrick Neville also referred to Nazism during an interview to describe the stay-at-home orders. In an interview on March 25, the day Polis issued the monthlong order, Neville in an interview on a conservative radio program said that orders like that lead to a “Gestapo-like mentality.”