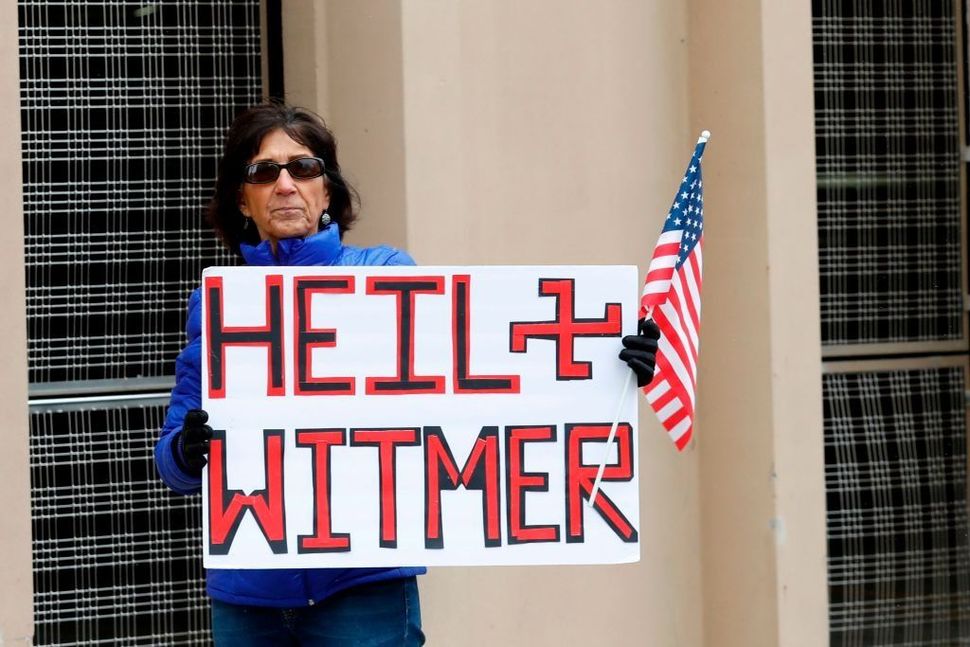 (JTA) — Anti-Semitic conspiracy theories and Holocaust imagery continue to be mainstays at anti-lockdown protests against governors and in state capitols.

A placard at an anti-lockdown protest held Saturday in Columbus, Ohio, in front of the state capitol bore the image of the body of a rat standing on its hind legs with a Star of David on its back, with the head of a Jewish man but a long pointed nose, rubbing his hands together. The sign reads “The Real Plague.”

This lady is yelling toward the Tennessee Capitol at @GovBillLee, trying to compare the coronavirus shutdown to the Holocaust.

“80 years ago Jews didn’t have a chance. We f—ing do,” she shouts. pic.twitter.com/VEHoukbKyJ

A photo of the sign being held out of the window of a minivan driving near the downtown Columbus protest, taken by Cleveland.com reporter Laura Hancock, was retweeted hundreds of time. A second photo tweeted by Democratic Ohio State Rep. Casey Weinstein, who is Jewish, showed two men holding the sign outside of their vehicle.

“There are symbols of hatred mixed in,” he told Cleveland.com. “I think it’s important to call that out. I’m not going to let that pass. I’m not. There are people out there exercising their rights. By no means am I saying they’re all anti-Semitic, they’re all racists, but there is an element there.”

“My videos and interviews are generating a lot of positive responses and people are waking up. My recent analogies are poignant and relative to our times.,” she wrote. “While human lives are certainly more valuable than a business, we cannot underestimate nor ignore that our businesses are the life blood of the citizens who own them, the communities they are in and to the customers they serve. Losing the former destroys the latter.”

Also last week, Colorado Gov. Jared Polis became emotional during a news briefing about the coronavirus crisis in his state when a reporter said that the public has compared his stay-at-home order to Nazism, and chants comparing Michigan’s governor to Hitler were among those heard at a protest of the state’s stay-at-home order by thousands of demonstrators.