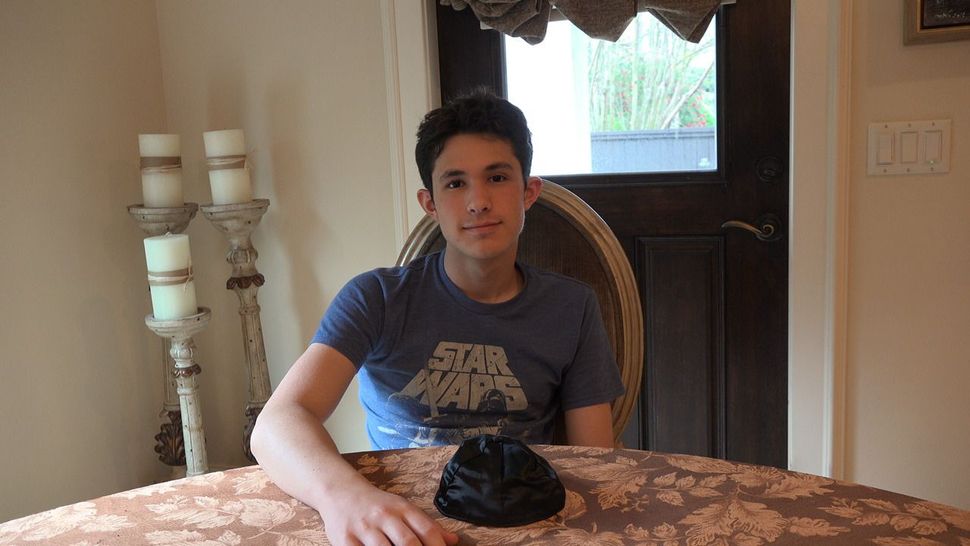 Matthew Jason, 15, at the kitchen table that serves as his mask-making workshop. Image by Matthew Jason

After years of attending friends’ bar and bat mitzvahs, brothers Matthew, Jeremy, and Danny Jason had dozens of kippot stashed all over their Houston home, souvenirs they never thought they’d need again.

But in the era of coronavirus, there’s a good use for any object that covers the nose and mouth. In the past several weeks, the brothers and their parents have converted hundreds of kippot into makeshift face masks and distributed them among Houston’s homeless population.

Matthew Jason, 15, said that he and his older brothers were struck by inspiration while fiddling with their kippot before a Shabbat dinner.

“We were already thinking about how to do something for the community,” he said. Now, they had an idea.

In the subsequent weeks the brothers turned their home into an impromptu mask-making factory, sewing elastic bands to every kippah they could find. They donated the finished products through Food Not Bombs, an organization that provides meals to homeless people in the Houston area. Prior to the coronavirus pandemic, both Matthew and Jeremy Jason, 19, volunteered with Food Not Bombs once a week.

After exhausting their stock of kippot, the brothers turned to their synagogue, Congregation Brith Shalom, for help with procurement. Their fellow congregants have proved effective supply chain managers: Matthew Jason says that every time he stops by the donation box outside the synagogue’s building, he’s sure to find a few dozen kippot. So far, the brothers have made about 300 masks.

While homemade masks aren’t a long-term substitute for medical protective gear, for now the brothers are filling an urgent need in their community.

“People are very grateful we are doing this,” Jeremy Jason told the Jewish Herald-Voice.