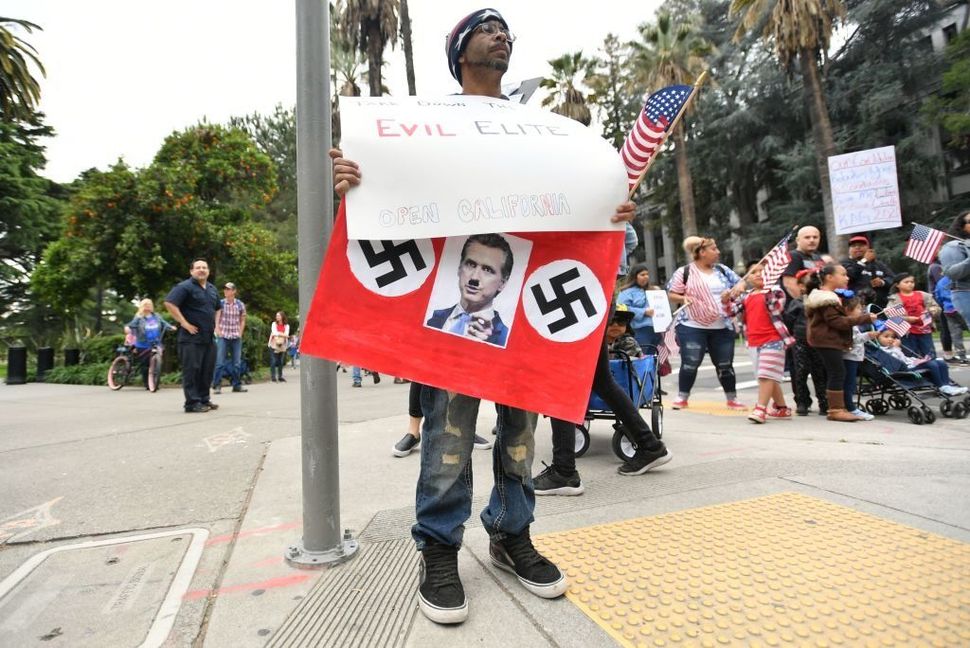 A man displays a sign depicting California Governor Gavin Newsom as a Nazi as hundreds of people gather to protest the lockdown in spite of shelter-in-place rules still being in effect at California’s state capitol building in Sacramento, California on April 20, 2020. Image by JOSH EDELSON/AFP via Getty Images

(JTA) — Holocaust imagery and rhetoric continue to be evident at protests against stay-at-home orders in state capitols.

Signs reading “Heil, Pritzker” and “Arbeit Mach Frei JB,” the latter a reference to the German words meaning “work will make you free” posted over the gate of Auschwitz, were seen Friday afternoon at a protest against stay-at-home orders in Springfield, Illinois. “JB” referred to the Jewish governor of Illinois, JB Pritzker.

Spotted yesterday at the protest in Michigan. Keep in mind, the name of the demonstration: American Patriot Rally. (Photo by JEFF KOWALSKY / AFP via Getty Images) pic.twitter.com/wMMgl4PHhB

On Thursday afternoon, a protestor in the Michigan capitol Lansing, carried a sign depicting the governor, Gretchen Whitmer, as Adolph Hitler. Last month, stay-at-home protesters at the statehouse held signs reading “Heil Whitmer” next to a swastika.

The Auschwitz Museum and Memorial condemned the sign in Illinois, writing in a tweet: “’Arbeit macht frei’ was a false, cynical illusion the SS gave to prisoners of #Auschwitz. Those words became one of the icons of human hatred. It’s painful to see this symbol instrumentalized & used again to spread hate. It’s a symptom of moral & intellectual degeneration.”

Responding to the Michigan protest, President Donald Trump on Friday called the protesters “very good people,” a description reminiscent of his defense of protesters at the the deadly neo-Nazi march in Charlottesville, Virginia, in 2017, in which he blamed “many sides” for the violence and said there were “very fine people” on both sides.

“The Governor of Michigan should give a little, and put out the fire,” Trump tweeted Friday. “These are very good people, but they are angry. They want their lives back again, safely! See them, talk to them, make a deal.”

“Arbeit macht frei” was a false, cynical illusion the SS gave to prisoners of #Auschwitz. Those words became one of the icons of human hatred. It’s painful to see this symbol instrumentalized & used again to spread hate. It’s a symptom of moral & intellectual degeneration. https://t.co/ZRxja8x6eS