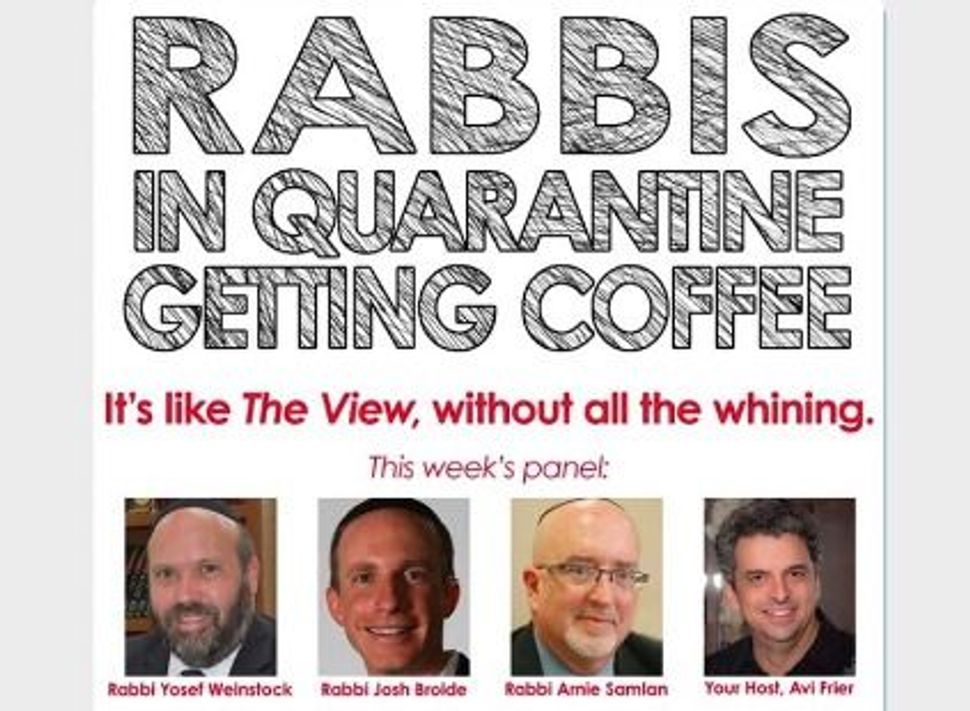 A synagogue in Florida revised a slogan for an all-male panel after a tagline linking women and whininess drew criticism from feminists who are trying to address what they see as a lack of gender equity in Jewish communal work, such as education, philanthropy and the pulpit.

As part of a ramped-up slate of online offerings amid the coronavirus pandemic, the Orthodox Young Israel of Hollywood-Fort Lauderdale is offering a a virtual talk show hosted by a rotating panel of male rabbis, called “Rabbis in Quarantine Getting Coffee.” Organizers advertised the show with the tagline “It’s like The View, without all the whining,” referring to a popular daytime talk show hosted by a panel of women. The name of the series is also an allusion to a pop-culture hit: comedian Jerry Seinfeld’s series, “Comedians in Cars Getting Coffee.”

On social media, many criticized the tagline, pointing out the longstanding use of words like “whining” to demean women who are outspoken in public and arguing that it is sexist to publicize an all-male show by mocking an all-female one in such a gendered way. One critic wrote on the synagogue’s Facebook page that the advertisement “plays off of stereotypes about women’s emotions and demeanors, and asserts that women in general are whiny.”

Avi Frier, the Program Director at Young Israel and host of the talk show, said he had written the tagline, which changes with each episode of the show, “without thinking about gender one bit.” He added that many online reviews of “The View” describe the show’s content in a similar manner. Frier shared the advertisement just before turning off his phone for Shabbat on May 1, and only became aware of mounting criticism when he checked Facebook the next night. “I thought, ‘That was a huge mistake, that wasn’t what I meant to say,’” he said.

Frier immediately changed the event’s tagline to “Sometimes it’s okay to laugh at the rabbi.”

While 70% of employees of Jewish organizations of women, they hold only 30% of executive roles. In the past, feminist Jews have called out all-male panel rosters and encouraged male allies to boycott them.

However, others pointed out that it would have been hard for Young Israel to avoid a “manel” when creating a talk show for rabbis, as mainstream Orthodoxy allows only men to be rabbis.

“The people who will attend this event are those who want to hear from these rabbis. If you don’t want to listen to an all-male panel, don’t attend,” wrote one poster on the synagogue’s Facebook page.