(JTA) – New York City Mayor Bill de Blasio tweeted a message last week calling out “the Jewish community” for violating social distancing guidelines after a Hasidic funeral drew hundreds onto the streets of Brooklyn. The tweet was swiftly criticized for unfairly targeting the Jewish community when the majority are abiding by public health guidelines, and the following day the mayor said he felt “regret” if his tone “gave people the feeling of being treated the wrong way.”

De Blasio himself spoke of those ties last week at a news conference in which he addressed his tweets.

Here’s a look at the history of de Blasio’s relationship with the city’s haredi Orthodox and a rundown of some moments when he clashed or compromised with the community. 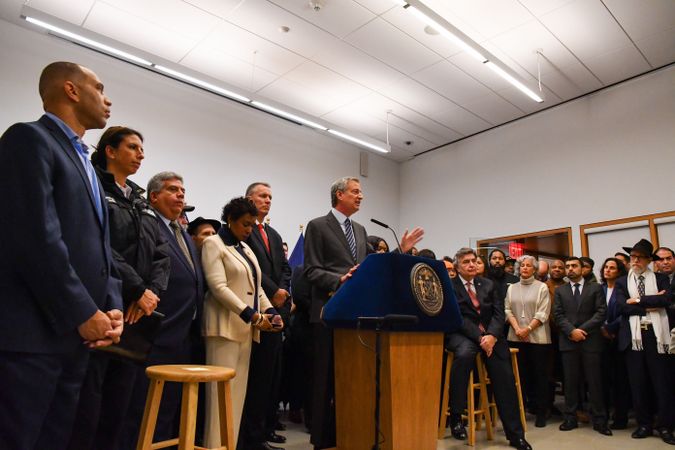 De Blasio’s relationship with the Orthodox communities in New York City date to his days as a city councilman representing parts of Brooklyn, including the heavily haredi Orthodox neighborhood of Borough Park, from 2002 to 2009. De Blasio was twice re-elected with overwhelming majorities, then served as the city’s public advocate from 2010 to 2013 before winning the mayoralty in 2013.

Two Orthodox Jews who sat on his mayoral inauguration committee, Jona Rechnitz and Jeremy Reichberg, were later accused of buying access to City Hall and sentenced to prison time. Though investigations swirled around the mayor and his associates for months, de Blasio was never charged.

Rabbi David Niederman, director of the United Jewish Organizations of Williamsburg and North Brooklyn, told The Wall Street Journal in 2016 that de Blasio was more responsive to the needs of the Hasidic community than the mayor’s predecessor, Mike Bloomberg.

“We were basically ignored then,” Niederman said.

When de Blasio’s presidential run fell short of donations needed to qualify for the primary debates in August 2019, he turned to the Orthodox community for support. A message sent around on WhatsApp appealed to members of the community to donate “to show that the public recognizes those who understand our interests,” according to a report by Politico.

The mayor’s relationship with the Jewish community extends beyond the Orthodox community. An ardent supporter of Israel, de Blasio has repeatedly denounced the Boycott, Divestment and Sanctions movement against Israel.

While campaigning for mayor in 2013, de Blasio said he would look into easing regulations around metzitzah b’peh, a circumcision practice in which blood is sucked from a baby boy’s genitals that was linked to several cases of herpes in the newborns. The Bloomberg administration had required parents to sign a consent form notifying them of the risks involved in the practice, but de Blasio viewed that as onerous. The move earned him an endorsement from a faction of the Satmar Hasidic community.

In 2015, de Blasio delivered, repealing the regulation requiring the consent form and instead required hospitals to hand out an informational brochure on the risks of the practice. He also got Hasidic leaders to agree to test anyone who performed a circumcision on a baby found to have herpes, though the tests would not be required by law.

By 2017, after it became clear that the testing agreement wasn’t stopping new cases of neonatal herpes, de Blasio adopted a new policy banning anyone found to have infected babies with herpes from engaging in metzitzah b’peh on penalty of a $2,000 fine, angering some Orthodox families as much as the Bloomberg regulations they replaced.

Between September 2018 and August 2019, there were 649 confirmed cases of measles in New York City, according to the city’s Health Department, with most of them centered in Borough Park and Williamsburg, two neighborhoods with large haredi Orthodox populations. More than 20 Orthodox schools in Brooklyn were found to have immunization rates below 90%.

While de Blasio pleaded for compliance and prominent rabbis worked with the mayor to spread the message, anti-vaxxers in the haredi community found support through a network of activists and parents spreading the anti-vaccination message through conference calls, rallies and social media.

In April 2019, de Blasio declared a state of emergency over the measles outbreak and required the unvaccinated to be vaccinated or pay a fine. A number of Orthodox schools were temporarily closed.

Beginning in late 2017, New York City experienced an uptick in anti-Semitic crime, particularly in Brooklyn, where a major portion of the city’s Orthodox community is located. While much of the increase could be attributed to vandalism, there also was a marked increase in violent, but seemingly random, attacks on visibly Orthodox Jews, a problem that has been particularly difficult for de Blasio to address.

The mayor increased patrols of Jewish neighborhoods and in front of Jewish buildings around the High Holidays, as well as during spikes in anti-Semitic violence in 2017 and more recently in 2019.

In September, de Blasio announced a new Office for the Prevention of Hate Crimes headed by Deborah Lauter, a former director at the Anti-Defamation League, to address rising anti-Semitic violence in parts of New York City, especially in areas of Brooklyn with many visibly Orthodox Jews.

In December, following a deadly attack on a kosher supermarket in Jersey City, N.J., de Blasio announced the formation of a new unit of the city’s Police Department focusing on racially and ethnically motivated extremism. That same month, after an attack on a rabbi’s home in Monsey, an upstate village about 30 miles from Manhattan, de Blasio promised an increased police presence as well as extra lighting and security cameras in Jewish neighborhoods in New York City. He also expanded anti-hate programs for city schools.

The mayor had been criticized for responding too slowly to the uptick in attacks before they snowballed into a crisis. Several City Council members criticized de Blasio in December for failing to adequately staff the hate crimes office. And Chaim Deutsch, an Orthodox city councilman representing part of Brooklyn, criticized the mayor for blaming the attacks on white supremacists.

“I have not seen any white supremacists coming in here committing these hate crimes,” Deutsch told the New York Post.

In 2015, the city’s Department of Education promised to investigate 39 yeshivas for failing to provide an adequate education in secular subjects. The investigation came in response to a letter by Yaffed, an advocacy organization founded by graduates of Orthodox yeshivas fighting for improved secular education in those schools.

Fifty-two parents of yeshiva students signed the letter, which alleged that the schools were not providing adequate instruction in secular subjects and were failing to meet standards set by the state and city Departments of Education.

It took the city more than four years to release its report on the matter, in late 2019. The investigation showed that five schools had made no substantive progress, while the rest showed varying degrees of improvement.

An accompanying report from the city’s Department of Investigation said the de Blasio administration had delayed publication of the report to aid the administration’s fight with state lawmakers in its bid to retain control over city schools, accusing de Blasio of “political horse-trading.” The report also said the city had taken an “accommodating approach” to its probe of Orthodox schools.

Yaffed said de Blasio’s behavior was a “disgrace” and called for further investigations.

In letters released Thursday, two synagogues from the Satmar community in Williamsburg praised the mayor and denounced his critics. They specifically pushed back on charges that the mayor had waded into anti-Semitic speech.

“We want to disavow the attacks and derogatory language against our mayor, from people from outside the community and from reckless people among us,” one synagogue leader wrote.

A leader of another synagogue wrote: “The close relationship between Mr. De Blasio and our community go back close to two decades, during which time we have come to know, respect and appreciate his understanding and sensitivity to the unique needs of our community. We consider him a dear friend and pray for his success.”