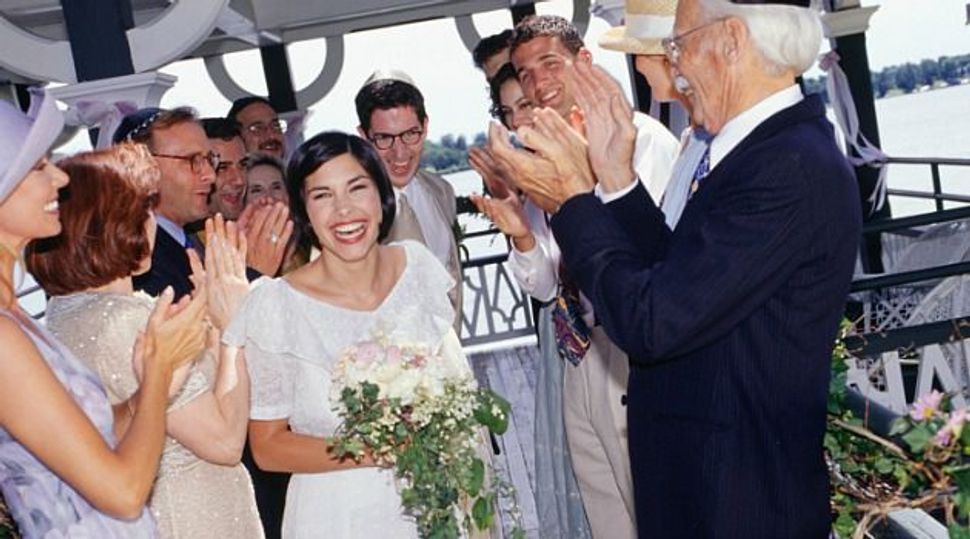 (JTA) — In late April, police in London and Chicago broke up splashy Jewish weddings that far exceeded the number of people allowed under social distancing rules.

Since then, no weddings have made the Jewish news — but that could change in the next day.

That’s because tonight begins Lag b’Omer, a holiday when observant Jews get a one-day break from an annual prohibition on celebrations. The holiday, which commemorates the end of a plague that killed thousands of an ancient rabbi’s students, is historically a popular wedding date, with large parties taking place throughout Israel and observant Jewish communities around the world.

This year, the coronavirus pandemic makes these traditional celebrations unsafe. Israel has barred public Lag b’Omer barbecues, which typically dot parks across the country, and even as it has begun lifting some restrictions, large gatherings remain illegal. (The limit for outdoor gatherings is set to rise to 50 on May 17, as long as coronavirus cases do not increase.)

Restrictions in the United States and many European countries are more stringent. In New York, home to the largest population of Jews outside of Israel, all gatherings of any size are barred until at least May 15.

Of course, restrictions on large gatherings were in place when the London and Chicago weddings happened — that’s why they made the news. They were scheduled for just before the first day of the Jewish month of Iyar, the last day that some communities allow weddings before Lag b’Omer. (Many others discourage weddings beginning on Passover, meaning that the annual mourning period may have mitigated the spread of coronavirus in Jewish communities.)

So will we see large Jewish weddings this week, potentially followed by spiking coronavirus cases in the weeks afterward? Quite possibly.

Jewish tradition strongly discourages the postponement of weddings, even advising that weddings should take place if a parent of the bride or groom dies that very morning. So couples who had selected Lag b’Omer as a wedding date before the pandemic began, or before it was clear that restrictions on large gatherings would be long-lasting, may be disinclined to delay.

Plus, with no end in sight for the pandemic, there’s little incentive to delay a wedding.

So the question is less whether Jews will marry in the next 24 hours but whether their celebrations will take forms that are inadvisable at this time.

Weddings don’t require large crowds, and virtually all Jewish leaders are openly exhorting their followers to continue to follow public health advice and refrain from coming together in groups of any size. Three groups representing Orthodox congregations in the United States advised communities this week to wait at least two weeks after states allow religious services to resume to begin holding their own.

Yet even small Jewish gatherings can take on a life of their own, as shown by the recent example of a funeral procession in Brooklyn that was designed to limit social interactions but instead drew a crowd of hundreds, as well as harsh criticism from New York City’s mayor.

Plus, Lag b’Omer comes as many countries and states begin relaxing pandemic restrictions, sometimes under pressure from restive populations.

Rabbis in at least one Orthodox community in America, in Cleveland, have authorized backyard prayer services beginning on Lag b’Omer — even as the national Orthodox leaders worried in their reopening guidelines that attendance limits and distancing practices could easily be abandoned at informal gatherings.

“Care must be taken,” the Orthodox Union’s guidelines said, “to ensure that this not become a free-for-all.”

Already, some in Israel are challenging limits on other Lag b’Omer celebrations, including parties to celebrate children’s first haircuts and holding bonfires despite their prohibition. A video showing a packed celebration in Jerusalem on Monday night was already making the rounds on social media.

The post Lag b’Omer is traditionally a day of Jewish weddings. What will happen under social distancing? appeared first on Jewish Telegraphic Agency.