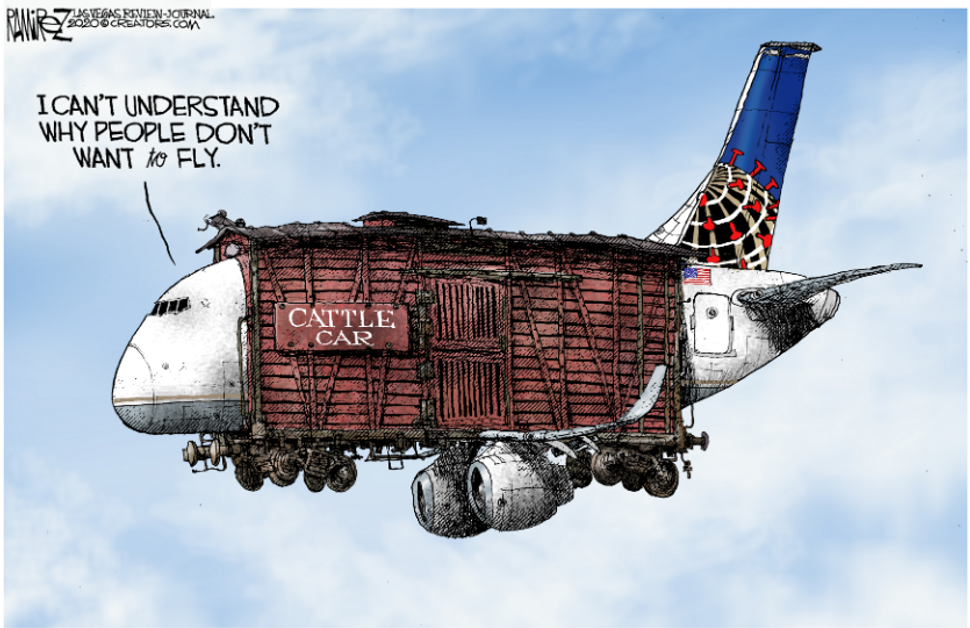 The American Jewish Committee has demanded an apology over an editorial cartoon that depicts a crowded airline flight as a “cattle car.”

This cartoon is offensive and a slap in the face of survivors and all who lost family in the Holocaust.

Ramirez, the cartoonist, was previously criticized by Jewish groups in 2000, during the Second Intifada, for drawing a Jew and a Muslim praying to a wall resembling the Western Wall that had stones spelling out the word “hate.”

The full color version of the cartoon also makes clear that the United Airlines logo on the plane’s tail was changed to look like a virus.

The AJC requested an explanation and apology from the Atlanta Journal-Constitution, one of the newspapers that ran the cartoon, saying in a tweet that the drawing was “offensive and a slap in the face of survivors and all those who lost family in the Holocaust.”

Many victims of the Holocaust were transported to concentration camps or death camps in crowded cattle cars. Some died during the journey.

Cattle cars themselves often pack many cows into tight spaces. People have been comparing crowded train or plane rides to cattle cars going back to the American Civil War.

Although AJC criticized the Atlanta newspaper for running the syndicated cartoon, Ramirez is actually employed by the Las Vegas Review-Journal, which is owned by Sheldon Adelson, the Jewish casino mogul and conservative megadonor.