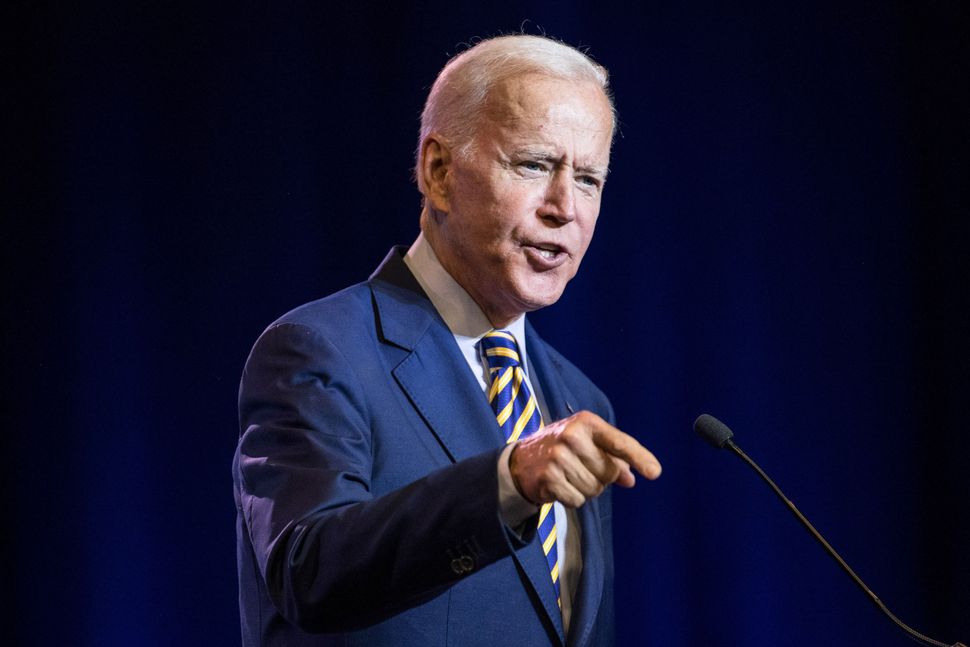 Former Vice President and presumptive 2020 Democratic presidential nominee Joe Biden said on Tuesday that he opposes Israeli annexation of the West Bank, as part of his general opposition to “unilateral steps” that would “undercut the prospects for peace.”

Biden, speaking at a virtual fundraiser with Jewish supporters, explained that he opposes calls by other Democratic politicians, most notably Senator Bernie Sanders, to conditions military aid to Israel over changing its policy towards the Palestinians, calling the idea “irresponsible.”

Biden also said during the call that the Palestinians must acknowledge Israel’s right to exist, “flat out,” and that while Israel should stop settlement activity, “we also shouldn’t let the Palestinians off the hook” for issues like incitement and support for terrorism.

“My commitment to Israel is completely unshakable,” Biden said. “As President I will continue our security assistance,” he continued, noting that the current level of military aid provided to Israel is the result of an agreement that Israel signed with the Obama administration in 2016, while he was Vice President. “I will maintain Israel’s qualitative military edge,” added the Democratic candidate.

Biden clarified, however, that annexation of West Bank settlements would not get a “green light” or any kind of recognition from his administration. “I do not support annexation,” he said. “Israel needs to stop the threats of annexation and stop settlement activity because it will choke off any hope of peace.”

Biden’s comments were the first time he addressed this issue since the formation of the new government in Israel. The coalition agreement between Prime Minister Benjamin Netanyahu and Deputy Prime Minister Benny Gantz serving as the basis for the government clearly says that West Bank annexation will take place in coordination with the United States. This means that if Biden is elected president, any move towards annexation will be very complicated to perform.

Biden said during the call that he has known Prime Minister Netanyahu for decades, and hinted that he was surprised by Netnayahu’s adoption of the annexationist arguments, which are affiliated with religious right-wing groups in Israel. “I know Bibi well, for over 40 years,” Biden stated. “This moves [him] so far to the right.” Biden clarified, however, that it “does not justify cutting military assistance to the state of Israel.”

Biden said that Trump has “used the relationship [with Israel] as political football and it harms both countries,” and promised that as president, he would strengthen bi-partisan support for Israel. Biden also said that he was worried about “destabilizing” events in Jordan.

The Jordanian King said earlier this week that Israeli annexation in the West Bank would seriously harm Jordan’s ties with Israel.

On the issue of anti-Semitism in the United States, Biden said that “I will speak out about it regularly as president,” adding that “it begins with the Jews but it never ends with the Jews.”

Biden also criticized President Trump for his comments after the neo-Nazi demonstration in Charlottesville, Virginia in 2017, when Trump said that there were “very fine people” among the neo-Nazis. “We need unequivocal condemnation of this behavior, starting with the president. You can’t say fine people on both sides,” said Biden.