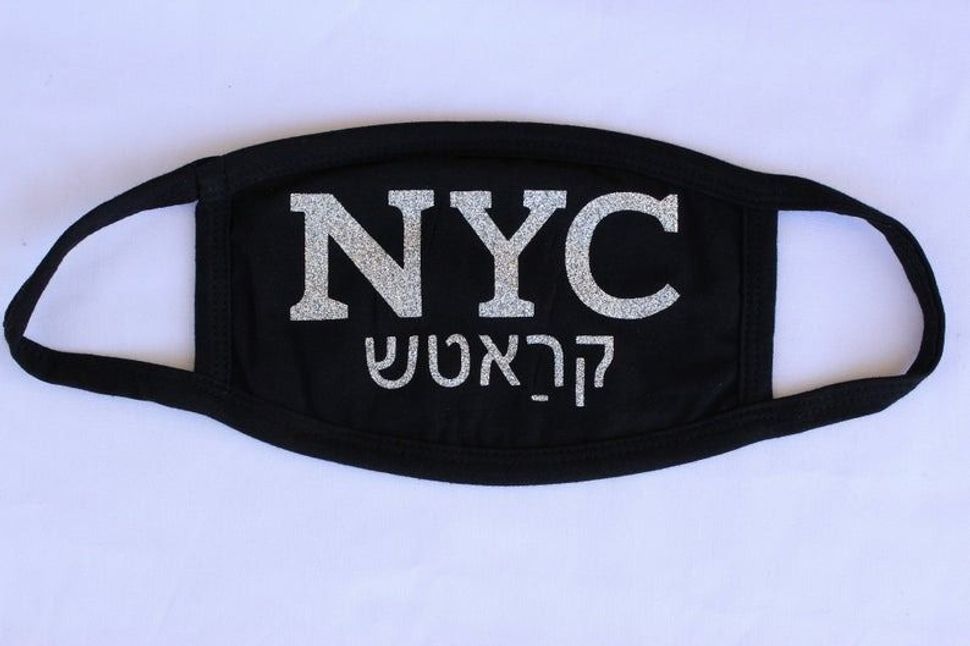 A facemask that meant to say “NYC Strong” in Yiddish but ended up saying “NYC Crotch.” Image by Tees Go Bling/Etsy

A vendor on the e-commerce site Etsy wanted to sell facemasks that said “NYC Strong” in Yiddish – but the final product said “NYC Crotch” instead.

The vendor Tees Go Bling, based in Wyoming, offers dozens of glittery facemask designs for sale, including images of the American flag and the Disney logo, as well as slogans of support for various cities like “Detroit Strong” and “Chicago Strong.”

The trouble began when they tried to sell a “NYC Strong” mask using the Yiddish word for strong, shtark. But while Yiddish is written right-to-left, like Hebrew, the Yiddish letters in shtark were printed left-to-right, meaning that anyone looking at it the correct way would read shtark backwards – as “crotch.”

The proprietor of Tees Go Bling, who goes by Sue, said that she had never done a Yiddish mask before. “I knew that there is a huge Jewish community in New York and I wanted to offer something for them,” she told the Forward by email.

But would-be customers quickly alerted her to her error. “Anyone wearing this mask in Williamsburg or Boro Park will get laughed all the way to the Bronx,” said one user.

Sue took the masks down, but later returned them to the online store after others messaged her to say they wanted to buy the mask anyway, she said.

“I was stunned by the demand over something that is spelled wrong!!!” she wrote. “My family had a good laugh over it and I thought, ‘I will never add anything up again in a language I am unfamiliar with. LOL!!’”

The “NYC Crotch” mask is available for $15 plus shipping costs on Etsy, with four mask colors and 17 different glitter variations.