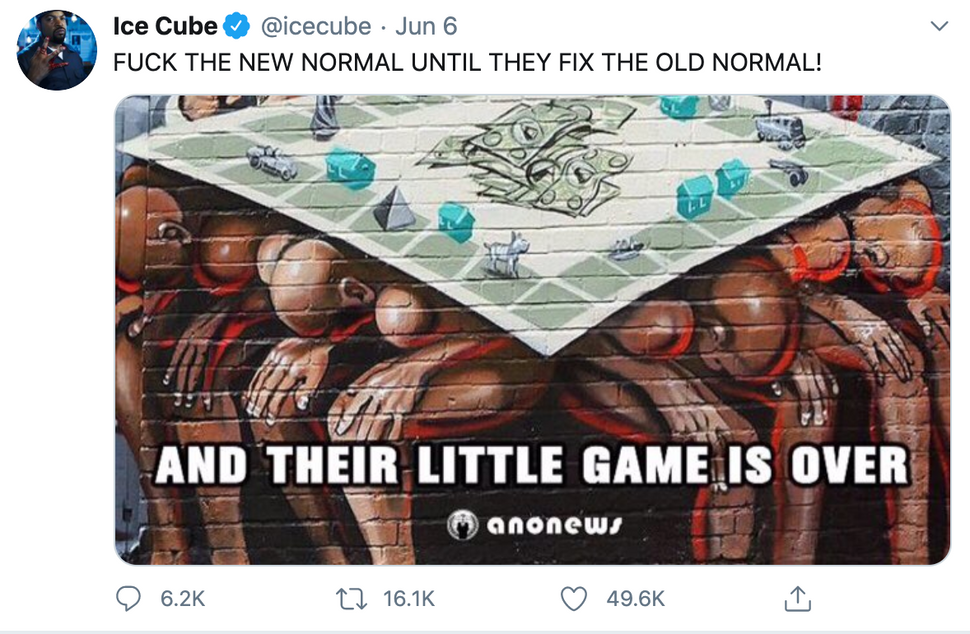 Rapper Ice Cube tweeted an image that has been labeled as anti-Semitic. Image by twitter

(JTA) — Rapper Ice Cube tweeted an image of a mural that was removed from a wall in London in 2012 after complaints that the image was anti-Semitic.

In the tweet, the image, which depicts several men sitting around a Monopoly board resting on the backs of naked black and brown men, is captioned: “All we have to do is stand up and their little game is over.”

The tweet, which came amid a torrent of expressions of support from the rapper for the Black Lives Matter movement in recent days, has been liked nearly 50,000 times and retweeted more than 19,000 times since it was posted on Saturday.

The image by Los Angeles artist Mear One was painted on a building in London’s East End in 2012. It was removed after complaints, but future-Labor Party leader Jeremy Corbyn at the time tweeted his support for artist’s right to display it. He later backtracked.

FUCK THE NEW NORMAL UNTIL THEY FIX THE OLD NORMAL! pic.twitter.com/wNN3uwOb4K

British journalist Michael Segalov, who wrote the issue in 2018, tweeted at Ice Cube to say the the image was anti-Semitic.

Ice Cube later tweeted that he was “very concerned about the table in this image,” but did not remove it.