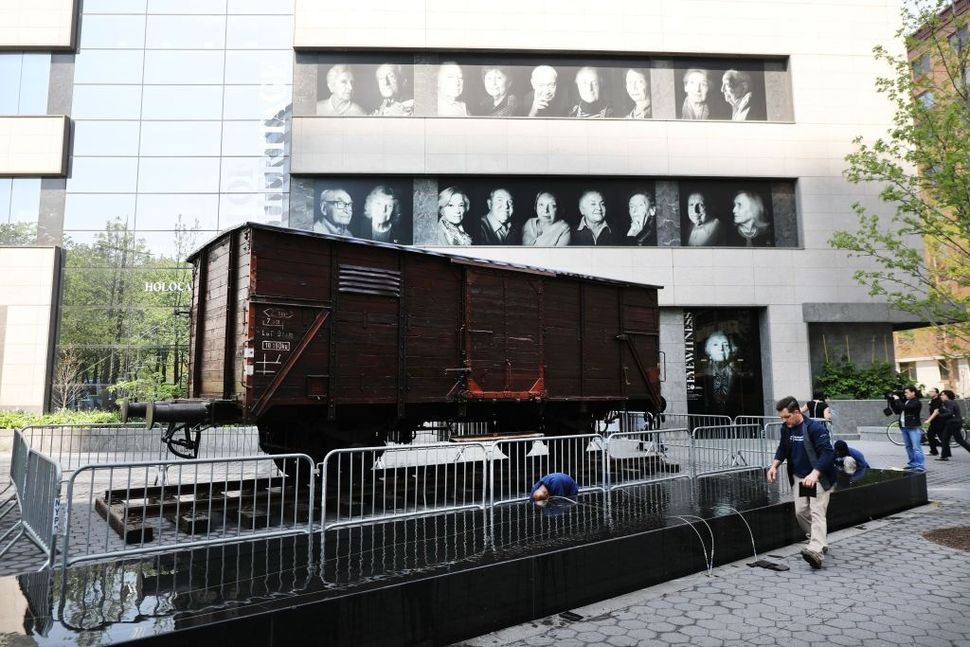 A boxcar used for the deportation of Jews to Auschwitz outside of the Museum of Jewish Heritage, part of its recent exhibition “Auschwitz. Not long ago. Not far away.” Image by Getty

New York’s Museum of Jewish Heritage is laying off about 34 people — about 40% of its staff — and reducing hours across some remaining positions due to financial pressures posed by the coronavirus pandemic, museum CEO Jack Kliger announced Monday in a staff call.

Kliger said that the coronavirus, which forced the museum to shut its doors on March 15, amounted to an “existential crisis,” according to an audio recording of the call, provided by an employee of the museum on the condition that they remain anonymous.

“This crisis has forced us to make some very difficult decisions to insure the museum’s survival,” Kliger said, noting that the museum’s new budget is 40% lower than last year’s.

The Museum of Jewish Heritage — whose full title includes “A Living Memorial to the Holocaust” — is only the latest Jewish organization to suffer during the pandemic shutdown. Numerous others have announced layoffs, furloughs and salary cuts. In March, the Tenement Museum laid off almost its entire staff; it now has a skeleton crew of five, down from 138 full-time and part-time employees.

Kliger said the museum knew when it closed that it would likely have to lay staff off, and in order to stave off layoffs the museum undertook an emergency fundraising campaigns, soliciting gifts from its trustees. It also applied for and received grants from the New York Community Trust and the federal Paycheck Protection Program.

Those measures, however, often aren’t enough to save everyone’s jobs. When Jewish groups must fire people, they can even use PPP loans to pay severance. Indeed, the Jewish Federations of North America, advised other groups on how to apply for and use PPP loans, itself received one and laid off as many as 37 employees out of about 180.

Kliger also said there were “no pay reductions executed at the senior management level or the executive level.”

At UJA-Federation of New York, which laid off 54 staff members, the chief executive announced he was foregoing his salary. According to the museum’s most recent tax filing, for its fiscal year ending in June 2018, its then-CEO Michael Glickman made $410,000 in total compensation, while its deputy director made $256,000.

On Thursday, however, three days after the meeting, Kliger reversed course, saying in an emailed statement that he would be taking a 15% pay cut, and that other members of management would take a pay cut as well, “for the foreseeable future.”

“While this had been discussed prior to this week, we could not disclose details as we were trying to determine how the savings could be used to support Museum programs and services,” Kliger said. “We do agree with the concerns of staff members that leadership share the financial burden at this time.”

In an emailed statement on Monday, Jeff Simmons, a spokesman for the museum, said: “To stave off further cuts, the Museum shifted several full-time employees to part-time status so that no remaining full-time staff would see any difference in their salaries.”

Simmons added that the grant and federal funds the museum has received will be exhausted by the end of the month.

Kliger said that the museum’s initial plan included more cuts, but that they reduced the total number of layoffs by reducing working hours among remaining employees.

The museum ended its fiscal year in June of 2018 with $1.4 million in revenue and $54 million in assets. It plans to reopen in September.