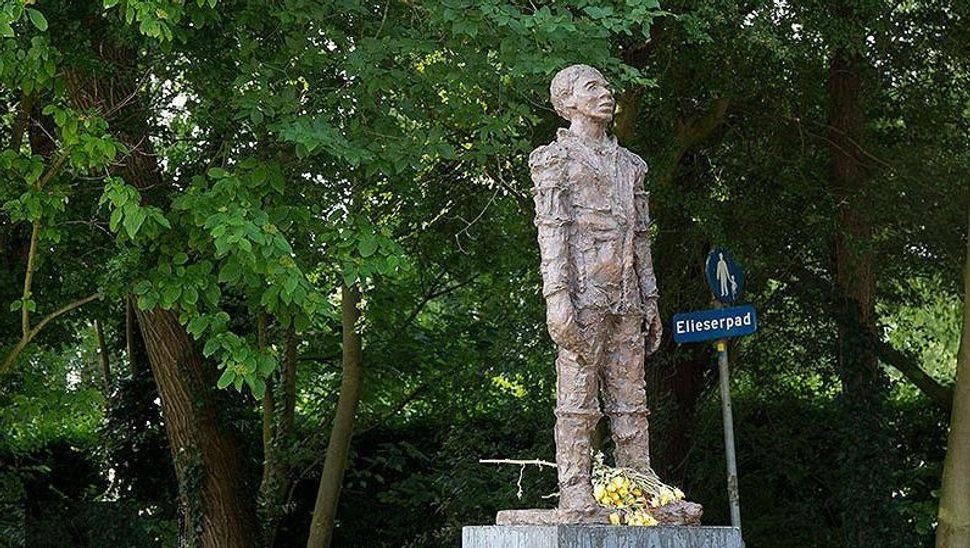 The statue titled “Elieser” at the Beth Haim Jewish cemetery near Amsterdam. Image by Historisch Amstelland

AMSTERDAM (JTA) — A statue that is seen as commemorating the suffering of slaves was vandalized inside a Jewish cemetery near the Dutch capital.

Orange paint was splashed on the statue titled “Elieser” on Wednesday at the Beth Haim Portuguese cemetery in Ouderkerk aan de Amstel, the oldest Jewish burial site in the Netherlands. The letters WLM, possibly an acronym for “white lives matter,” were written in orange, the Dutch national color.

Police are looking for two white men in their 20s with short hair who were seen near the statue shortly before the incident.

The statue is of “the good slave Elieser,” who is believed to have been brought over to the Netherlands in 1610 by his Jewish master, Paulo de Pina, who fled the Inquisition in Portugal.

Elieser was converted to Judaism at some point and buried in 1629 alongside some of the richest and most prominent members of the Portuguese Jewish community of the time. He became part and parcel of the de Pina family, according to Lydia Hagoort, a historian who researched his story.

The unusual case of Elieser, one of several slaves buried at the cemetery, made his grave an icon for Dutch people with origins in Suriname, a former colony in South America where many slaves from Africa had worked. Dozens visit his grave each year.

In 2015, a statue of Elieser was inaugurated at the Jewish cemetery with help from the Opo Kondreman organization, which commemorates the victims of the trans-Atlantic slave trade.