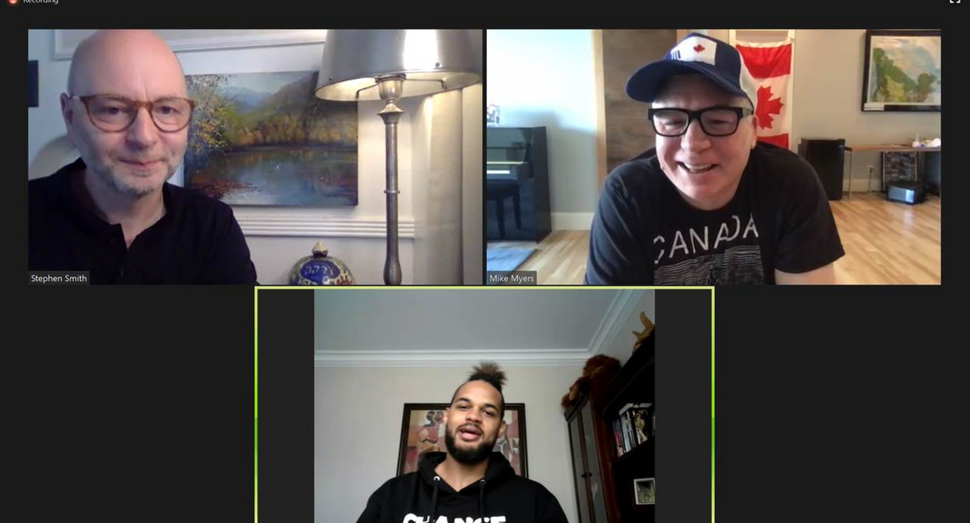 Mike Myers, who brought the world Austin Powers, Wayne, Shrek and Fat Bastard, isn’t the first name you think of when it comes to Holocaust education, but there he was, popping up on Zoom, to speak–– movingly–– to hundreds of students from around the world about genocide and hate.

“There’s a responsibility when you have a platform,” said Myers, wearing a T-shirt and baseball cap, with Canada’s national flag draped on the wall behind him. “I have an obligation to speak out against racism and institutionalized hatred and that’s why I’m here.” 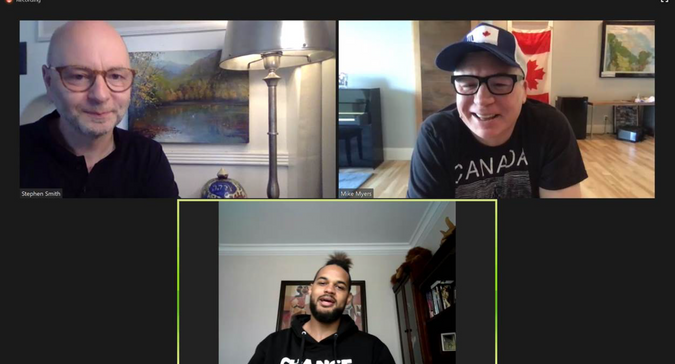 Myers joined a Holocaust survivor, a high school educator, a former NHL player, and USC Shoah Foundation staff leadership on the June 22 Zoom call for students (Grades 6 and up) and their teachers that centered on the power of personal narratives to create change.

The program, “Stories are Stronger than Hate: A Call to Action,” was organized by Liberation75 and the USC Shoah Foundation. More than a thousand students, representing 260 schools and 22 countries, including Argentina, Chile, Greece, India and Hong Kong, participated.

“When good people do something and see something and say something, that’s when change can happen,” Myers said. “All the hatred, slurs and ugliness cannot be okay. That’s something that everyone can do – see it, call it for what it is and say it’s wrong. Then we have to vote, everyone has to get organized, look at our own privilege and our own situation and live in some kind of rigorous and beautiful honesty. Democracy works if you work it. If one of us doesn’t have freedom and full citizenship then none of us has.”

The 1580 attendees were some of the students and educators who had planned to attend Liberation75’s conference in commemoration of the 75th anniversary of liberation from the Holocaust at the end of May, said Marilyn Sinclair, Liberation75’s founder and member of USC Shoah Foundation’s Next Generation Council. Due to COVID-19, the conference was rescheduled for 2021.

The program featured Pinchas Gutter, a Holocaust survivor from the Greater Toronto area; and Akim Aliu, a former NHL player who co-founded the Hockey Diversity Alliance, which aims to eradicate racism in the sport.

Aliu said that with few people of color playing, it was “hard to speak out…My whole mission in life is to help the next generation of kids that are our future, make them feel comfortable in their own skin, color, and race.”

“Populate it with your ideas, actions you’re going to take, and how we can use stories to help change the world,” he said.

“As I’ve been watching the worldwide protests, people are learning the names and stories of the people who have been victimized,” said Rachel Luke, a Toronto area high school educator, during the call. “When we know someone’s story, we can be compassionate toward them, and validate their lived experiences. When we share our stories it leads to allyship, and activism for change.”

Sinclair said the goal was to help the students “to connect those dots between what they’ve been learning all year [about the Holocaust] to what’s happening in their communities right now,” she said, referring to the Black Lives Matter movement. “It’s all about how we treat people and use individual stories to build empathy, stand with them and connect.”

“When I see what’s going on and the different problems that Black people are having it breaks my heart,” said Gutter, who survived five concentration camps. “People say ‘what can you do?’ You can always do a little bit.”