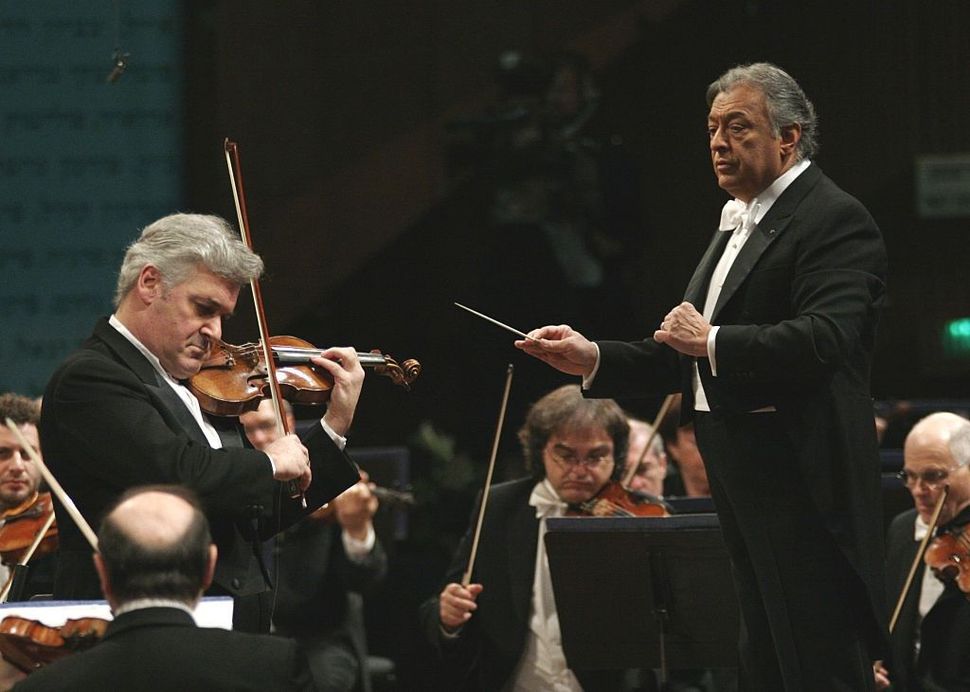 A free virtual concert featuring the Israel Philharmonic Orchestra (IPO) was disrupted on Sunday by a suspected cyber attack, preventing tens of thousands of viewers worldwide from watching and participating in the event.

Hosted by actress Helen Mirren and featuring some of Israel’s world-renowned soloists — including Itzhak Perlman, Pinchas Zuckerman and Yefim Bronfman — this was the first time the IPO would perform for free online, during a live-stream broadcast set to begin at 9 p.m. in Israel / 2 p.m. eastern time.

But when potential viewers logged onto Medici.tv, the subscription-based streaming site which broadcasts classical music concerts, they were blocked from accessing the performance.

About twenty-minutes later, Catherine Lou, chief financial officer for American Friends of the IPO, sent an email to registered attendees saying the concert had been “cyber attacked by someone trying to sabotage the event.”

Though the email encouraged registered attendees to continue to try and gain access, efforts were unsuccessful.

By 6 p.m. eastern time, no one had claimed responsibility for the attack, which crashed both the IPO’s website and Medici.tv’s site. But late Monday, the Israeli Security Services reported that a bot registered 1.7 million viewers simultaneously, which caused the sites to crash. According to organizers, 170,000 viewers were still able to access the Facebook feed and alternative streaming sources.

“Somebody obviously didn’t want people to see this,” said Irwin Field, who along with wife Helgard are longtime benefactors of the IPO and currently serve as co-presidents of its American fundraising arm, American Friends of the Israel Philharmonic Orchestra.

“The forces against Israel extends to a music program, which is really trying to make friends around the world.”

Tali Gottlieb, executive director of the IPO Foundation said in a statement, “Our organization had high hopes that this event would help us raise emergency funds to support members of the Israel Philharmonic in the face of an unprecedented financial crisis.”

Field said the free “global gala” had been in the works for two months and was scheduled to be broadcast simultaneously in ten different time zones, with the orchestra performing live from Tel Aviv at its home, Heichal HaTarbut, also known as the Charles Bronfman Auditorium. The soloists, each of whom volunteered for this event, pre-recorded chosen material and sent it in via video.

“This was hundreds and hundreds of hours of work,” Field said, adding that he did a lot of personal outreach for the concert because he believes people stuck at home are starved for cultural experiences.

“One man I know from the L.A. Philharmonic said to me, ‘Thank god there’s some great music I can listen to.’ And he’s not Jewish.”

Field did not want to speculate about the perpetrator of the attack prematurely, though he said it’s “obviously ideological.”

Rising tensions over the Israeli government’s planned annexation of parts of the West Bank, land known in the Bible as Judea and Samaria, may have played a role.

Several groups have already planned a July 1 protest at high-profile Israeli Consulates in the United States, the day annexation is expected to begin.

In Los Angeles, a digital flyer circulating on the Internet refers to the Israeli Consulate as the “Zionist Consulate” and promotes the protest as part of a “Days of Rage” campaign tied to annexation.

The IPO’s virtual gala was doubling as a fundraiser to make up for months of missed concert dates and performances due to the Coronavirus pandemic, which has hit arts institutions particularly hard. According to a statement, 13,000 people had pre-registered for the event. Field said donations had begun flowing in well before the cyber attack.

Although the live stream was sabotaged, the concert was recorded and will be available for viewing on youtube for 30 days.

Danielle Ames Spivak, executive director for the American Friends of the IPO, said in a statement, “It seems hackers were determined to silence our message and stamp out our voice, but they will not succeed.”