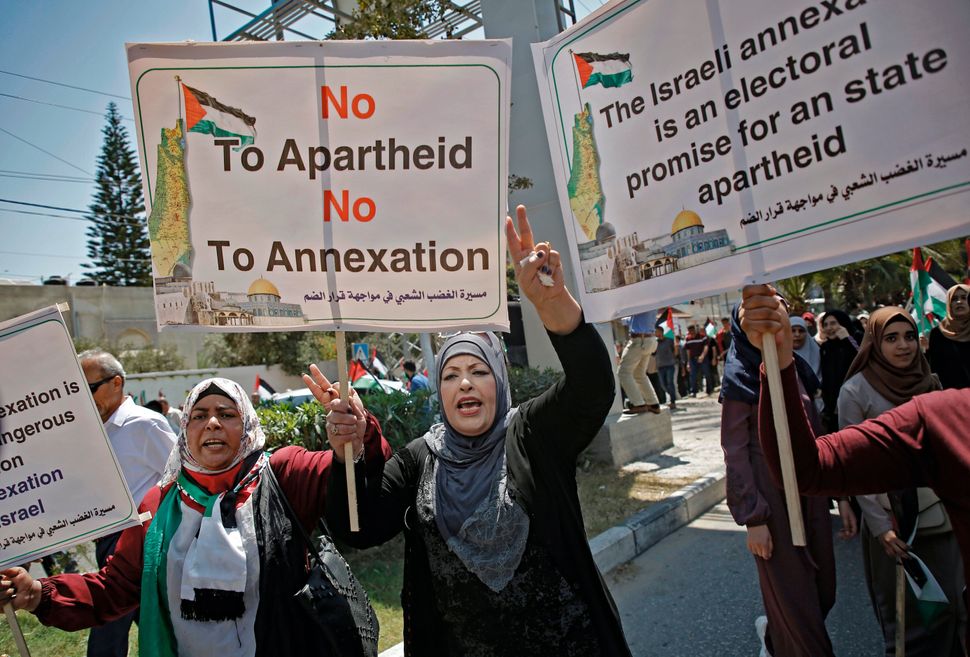 Palestinians chant and lift placards during a demonstration against Israel’s West Bank annexation plans in Gaza City on July 1, 2020. – Expectations of a major Israeli announcement on controversial annexations in the occupied West Bank dimmed, as global criticism of the project mounted and Palestinian protesters began gathering in Gaza. (Photo by MOHAMMED ABED / AFP) (Photo by MOHAMMED ABED/AFP via Getty Images) Image by Getty Images

Pro-Palestinian groups held a series of protest demonstrations across the United States on Wednesday against Israel’s plans to annex parts of the West Bank, an endeavor that the groups referred to as a “day of rage.”

In San Diego, protesters held a socially-distanced “car caravan,” traveling to honk outside several local government centers and Jewish community buildings. The Jewish facilities, including the local Jewish Federation, AIPAC headquarters and two local Hillel chapters, were empty because of the coronavirus pandemic.

In Washington, D.C., a protest organizer led around 200 people in a march from the Lincoln Memorial to the Capitol building, the Washington Examiner reported. Among the chants was “Israel, we know you, you murder children too,” followed by “Black Lives Matter” and “Palestinian lives matter.”

It was only a matter of time before the DC protests turned anti-Semitic. pic.twitter.com/YTbwwGuOYh

A livestream of a march in Brooklyn showed people chanting “intifada, intifada” – a reference to two waves of Palestinian terrorism that led to the deaths of around 800 Israeli civilians.

“We don’t wanna go just back to our homes in Gaza and the West Bank. We want all of it…we don’t want your two states.”

A taste of today’s #DayofRage in Brooklyn.

Additional chants from today include the genocidal “From the river to the sea” and “Intifada, intifada.” pic.twitter.com/DeUUZ6x44I