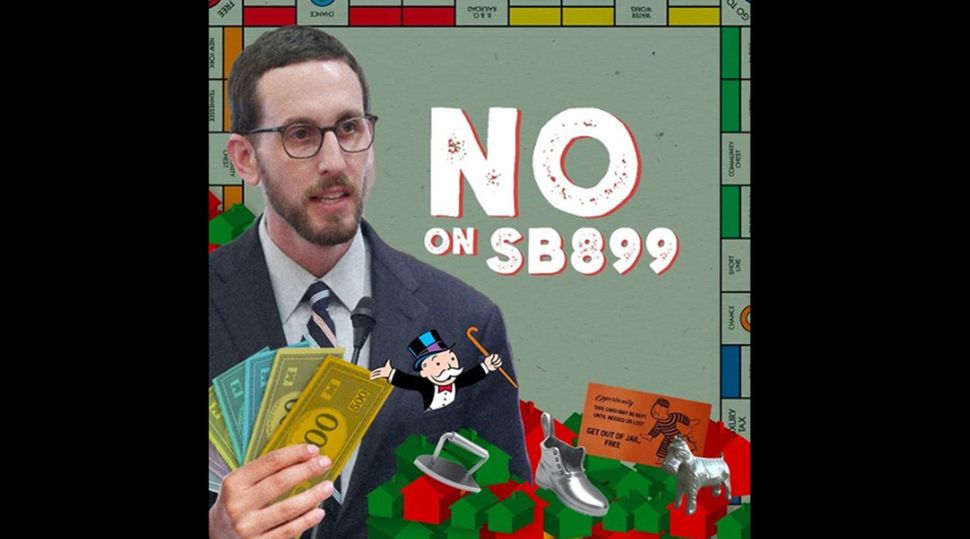 This image of California State Sen. Scott Wiener was said to evoke anti-Semitic stereotypes about Jews and money. Image by Matt Levin/Facebook

(JTA) — A California trade union placed a political advertisement on Facebook about a Jewish state senator that evoked anti-Semitic stereotypes about Jews and money.

The State Building and Construction Trades Council later removed the ad and apologized after being called out by the California Legislative Jewish Caucus, the political news website CalMatters reported Tuesday.

The ad accuses Sen. Scott Wiener, a San Francisco Democrat, of “selling out” to developers and the real estate industry. It featured an image of Wiener against a backdrop of a Monopoly game board, clutching a handful of Monopoly money.

The union objects to a bill authored by Wiener that would allow churches and other religious organizations to more speedily develop low-income housing on their property. The union wants union-level wages and union-trained workers for the projects, which would make them more expensive.  The state Senate passed the legislation on Friday.

“Everyone wants to be careful not to use that term (anti-Semitism) too lightly. But there’s not a question that it touched on anti-Semitic stereotypes and tropes,” Sen. Ben Allen, a Democrat from Santa Monica and chair of the California Legislative Jewish Caucus, told CalMatters. “So at the very least the folks who put it up ought to be made aware of how problematic moving in that direction is.”

The union’s president, Robbie Hunter, at first denied that the ad could have anti-Semitic connotations and suggested that Wiener was trying to deflect attention from the legislation. He said the union had designed ads using Monopoly money for non-Jewish lawmakers, too, but never released them publicly.