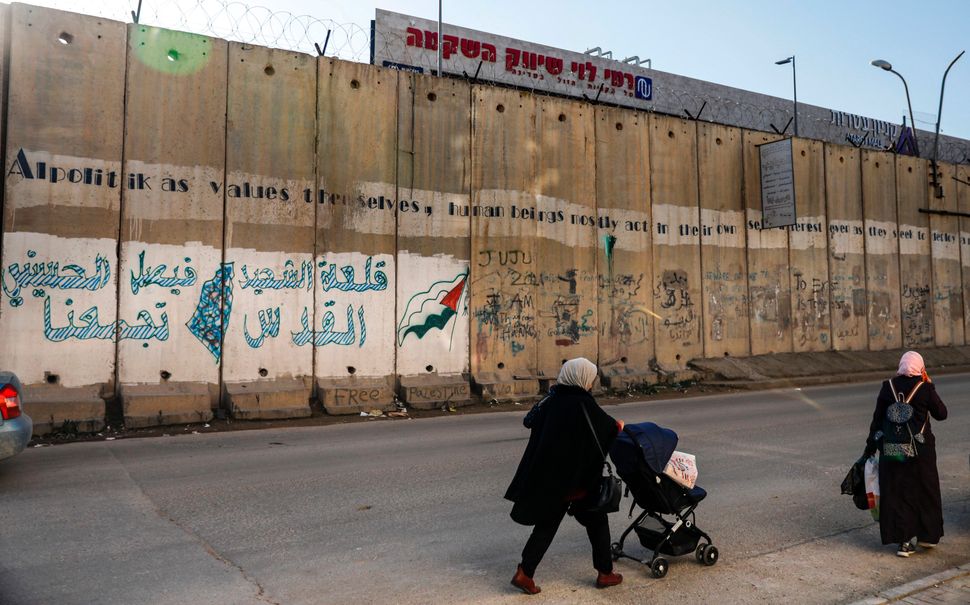 A woman pushes a child stroller while walking along the side of Israel’s separation barrier in the Palestinian village of al-Ram in the occupied West Bank on February 13, 2020. Image by Getty Images

WASHINGTON (JTA) — A House subcommittee included $250 million in funding for Israeli-Palestinian dialogue programs and Palestinian business development in a major spending bill — a pushback against Trump administration defunding in both areas.

An array of pro-Israel groups that do not often agree praised the spending plan, which has bipartisan support in the House of Representatives and the Senate.

The pro-Israel groups praising the move on Twitter included AIPAC, a center-right group, and J Street, a liberal Jewish Middle East policy group. Many singled out the Appropriations Committee chairwoman, Nita Lowey, D-N.Y., a longtime pro-Israel stalwart who led advocacy for the funding. Lowey, who is retiring this year, is Jewish.

The bill “also seeks to restore humanitarian and development assistance to the Palestinians to continue the viability of a two-state solution by providing resources to organizations working in the West Bank and Gaza,” Lowey said in her statement introducing the package.

ALLMEP, an umbrella group for peace dialogue, led lobbying for the package. The bill is subject to further revision as it heads to the full committee, then the House and finally reconciliation with the parallel Senate bill. However, the dialogue and investment component will likely survive because it has bipartisan backing.

Separately, the bill also includes $225 million for Palestinian relief and development funding, also a rebuke to Trump administration policy, which has cut such funding to virtually zero.