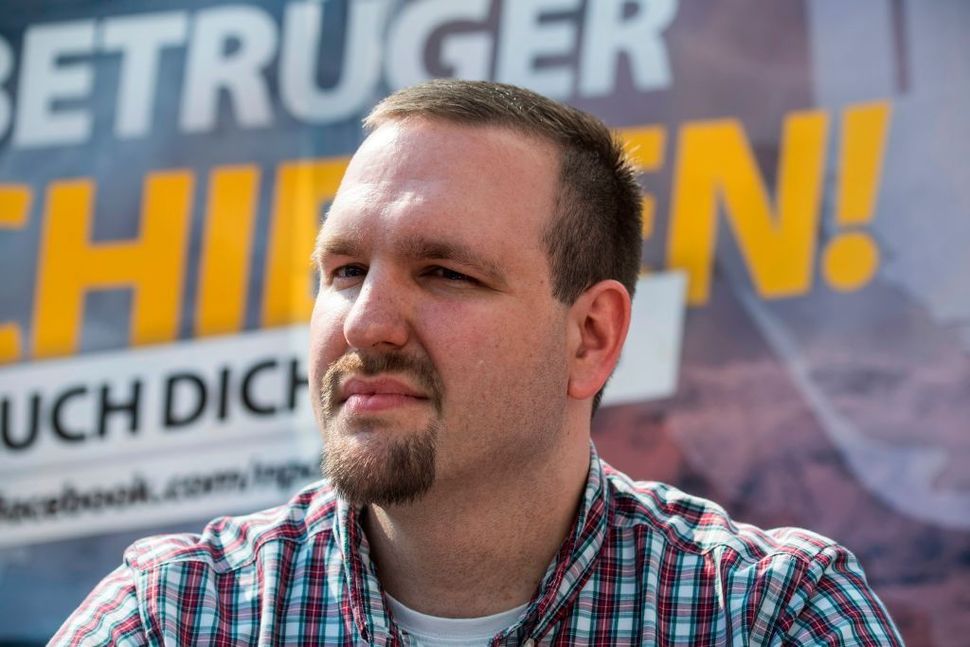 BERLIN (JTA) — A far-right activist will go to jail for insulting a German Jewish leader after the country’s highest court denied his appeal.

Sascha Krolzig, who heads the small far-right Die Rechte party, will serve a six-month sentence for calling the head of the Jewish community in  Herford-Detmold an “insolent Jewish functionary” and praising the SS.

Krolzig lost his appeal earlier this month and the verdict was made public on July 10.

According to German news reports, Krolzig had called Matitjahu Kellig an “insolent Jewish functionary” and demanded a boycott of Jewish organizations. The comments were made on the Die Rechte website after Kellig said in a television interview that a local municipality should take its official newsletter to a different printing press, since the one they used also disseminated right-wing radical material.

Defending the publisher, Krolzig said that the company merely offers books that criticize the “zeitgeist” and celebrate, among other things, the “exemplary and reliable men of the Waffen-SS.” He also called Kellig a “self-satisfied” and “insolent Jewish functionary” and accused him of having a “disturbed relationship with freedom of expression.” He concluded by saying that his party would “reduce the influence of Jewish lobby organizations on German politics to exactly zero in the shortest possible time.”

In 2018, a court handed down a six-month suspended sentence for incitement to hate and slander. A higher court upheld the sentence, which Krolzig again appealed.

The Constitutional Court upheld the sentence, finding that Krolzig had incited anti-Jewish hatred with statements they considered “concretely threatening” and clearly linked to Nazi propaganda. The court added that Germany’s Nazi past makes necessary “an increased sensitivity in dealing with the pejorative use of the word Jew.”

The post A far-right German activist will go to jail for insulting a Jewish leader appeared first on Jewish Telegraphic Agency.