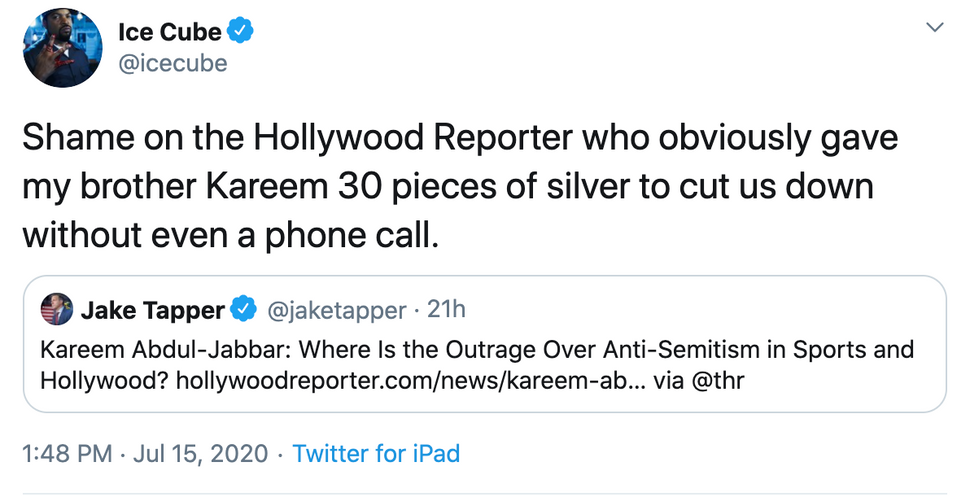 (JTA) — Rapper Ice Cube slammed NBA legend and columnist Kareem Abdul-Jabbar for calling him out in a piece taking celebrities to task for posting anti-Semitic statements on social media.

Abdul-Jabbar’s latest column in The Hollywood Reporter named Ice Cube among various figures from the entertainment world he cited for perpetuating anti-Semitic canards.

Shame on the Hollywood Reporter who obviously gave my brother Kareem 30 pieces of silver to cut us down without even a phone call. https://t.co/XRXPu0NRBW

“Shame on the Hollywood Reporter who obviously gave my brother Kareem 30 pieces of silver to cut us down without even a phone call,” the rapper tweeted.

The reference to “30 pieces of silver” is a nod to Judas, the disciple said to have betrayed Jesus.

“Just when you thought @icecube could not get any more Antisemitic …” international human rights lawyer Arsen Ostrovsky tweeted in response.

Abdul-Jabbar’s column noted a series of tweets Ice Cube had posted in early June, including a mural some have called anti-Semitic and images associated with conspiracy theories against Jews.

On June 30, the rapper’s attorneys filed a cease-and-desist order against journalists Charles Nash of Mediaite and Marlow Stern of the Daily Beast for publishing “outrageously false unverified, and disparaging allegations regarding Ice Cube,” whose given name is O’Shea Jackson. Above the letter he wrote, “Don’t play with me. This is just phase one.”

The letter, sent from a Los Angeles law firm, specifically refers to “the ridiculous, false accusation that Ice Cube ordered his ‘entourage to beat up a rabbi,’ was sued for it, and that he is anti-Semitic.”