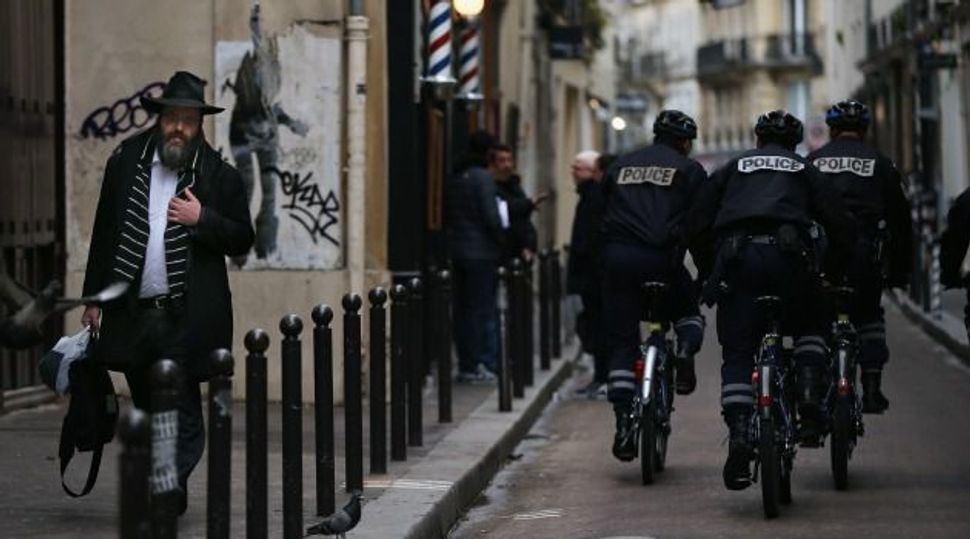 (JTA) — On April 27, Youssef Tihlah left his home near Paris planning to avenge what he later called “the situation in Palestine.”

Over the past decade, that has been the motivation for multiple perpetrators of anti-Semitic terrorist acts in Europe, who have targeted Jews as payback for their perception of Israel’s actions.

But Tihla, a 29-year-old Muslim with a history of petty crime, was not after Jews. According to his own confession after the crime and a letter he had written before it, he decided to target police officers. Tihla rammed his cars into two of them in the suburb of Combes, wounding one  seriously.

French police officers and activists against anti-Semitism said the attack was the latest example of an emerging trend in France in which anti-Semites have come to see the police and other security services as extensions of “Jewish power” — a theme often discussed in the conspiracy theories that inspire and justify such attacks.

Claims of police brutality, inspired by protests in the United States in the wake of the death of George Floyd, have “only poured oil on that fire,” said Sammy Ghozlan, a former police commissioner from Paris and the founder of the National Bureau for Vigilance Against Anti-Semitism, or BNVCA.

“The anti-Semitic equation between cops and Jews is a new development borne out of conspiracy theories, and it’s already inciting violence and bloodshed,” Ghozlan said. “It’s dangerous not only to Jews, but also for the rule of law in France.”

On June 13 in central Paris, at a demonstration against perceived police racism in France spurred by the Floyd killing, multiple protesters shouted “dirty Jews” at counterprotesters who had unfurled a banner reading “Justice for victims of anti-white crimes.” Not only were the counterprotesters not Jewish, they belonged to a far-right movement, Generation Identitaire, that has faced allegations of anti-Semitism.

The same rally also featured banners accusing Israel of teaching French police how to oppress minorities (touching on an issue that has raised debate in the United States as well).

Ghozlan said the “phenomenon of targeting Jews and security forces, making them interchangeable” was first seen “on a large scale” in the  2012 attacks in Toulouse when a jihadist, Mohammed Merah, shot dead three soldiers near that city before murdering four Jews at a school there two days later. Merah had also cited the Israeli-Palestinian conflict as his motivation.

Amedy Coulibaly, another Muslim extremist who murdered four Jews at the Hyper Cacher kosher supermarket on the outskirts of Paris on Jan. 9, 2015, had killed a Black police officer the day before. He, too, cited his desire to “defend Palestinians” as the reason for his attacks.

In 2018 in Saint-Quentin, a town 70 miles northeast of Paris, a man who was later arrested and sentenced to four months in prison overpowered a police officer at a residential building. He forced the officer to kiss his legs and said, according to the officer, “We’ll pull the AK-47 on you and throw you in the dungeon like the Jew Halimi.” It was a reference to the anti-Semitic torturing and murder of Ilan Halimi in 2006 near Paris.

Michel Thooris, a Jewish police officer and police union activist from southern France, also said that the joint targeting of police officers and Jews is “particularly common.” He said he has not experienced anti-Semitic abuse personally in connection with his work for the National Police, but noted that many of his non-Jewish colleagues have.

In his view, the phenomenon has made the streets more dangerous for police officers.

“The word ‘Jew’ is an insult in immigrant neighborhoods today, which is why it’s used as a swear word,” Thooris said, referencing French suburban areas with largely Muslim populations that have crime and radicalization problems. “But it also owes to the multitude of conspiracy theories in which Jews and Israel run the world, and France, with its police as their puppets.”

The same trend is emerging elsewhere in Western Europe, including the Netherlands. In 2017, Turkish demonstrators there rioted and shouted “cancer Jews” at police officers after learning that authorities had denied a Turkish Cabinet minister entry to the country.

This worldview is reinforced by the fact that “soldiers, police and other security forces around Western Europe” are now ubiquitous around synagogues and other Jewish institutions, said Rabbi Pinchas Goldschmidt, president of the Conference of European Rabbis.

The protection is necessary because of the risk of violent attacks, “but for anti-Semites it’s all the visual confirmation they need for their narrative in which the Jews are police and vice versa,” Goldschmidt told the Jewish Telegraphic Agency.

“To some Muslims, Jews are not even human, impure beasts or vermin,” said Thooris, a supporter of the far-right party of Marine Le Pen, which has its own complicated history of anti-Semitism. “When this is extended to police officers, it justifies and invites brutal violence.”

Ghozlan, who had served on the police force for decades prior to his retirement in the 1990s, had never experienced anti-Semitic abuse on the force and said it has been a new development.

Meanwhile, French Jews have not been shy about supporting the police. At rallies, they often sing “the Marseillaise,” the French national anthem, to honor police for protecting their institutions. Major Jewish groups like BNVCA and the CRIF umbrella group often make statements expressing gratitude and solidarity with police, especially when security service personnel are injured in the line of duty.

At a 2017 dinner with President Emmanuel Macron, CRIF President Francis Kalifat spoke about his father, who was a proud police officer.

“French, Jewish — I know he found something that deeply connected these two identities: the attachment to the law, love of justice and the affirmation of liberty,” Kalifat said.

CRIF unreservedly supported the police at the height of a debate about police brutality in France in 2016 following the death of Adama Traore, a young Black man who died in police custody. Several committees of inquiry cleared the arresting officers, but the incident triggered riots. The protests over Traore resumed with the George Floyd killing this year — including at the June 13 rally in which protesters shouted “dirty Jews.”

In 2016, CRIF held a rally in solidarity with officers who were wounded in the line of duty. The same year, it also published a publication titled “The Golden Book,” which features “messages to police and army who protect us,” with laudatory quotes by rank-and-file community members alongside more prominent figures.

Gil Taieb, a CRIF vice president, defended the French police in a statement from June 5 as the Floyd incident 10 days earlier unleashed protests in France.

“No, the police are not racist,” Taieb wrote, “but some police officers are and have nothing to do with this pillar of justice and order.”

Anne Sinclair, one of France’s best-known journalists and a prominent member of the Jewish community, generally agrees with that view. But during a Zoom event Monday about her new book on the Holocaust, “The Celebrities Transport,” she recalled a painful time in the relationship between French Jews and police: World War II, when the police effectively collaborated with the Nazis in the deportation of Jews and the theft of their possessions.

“Not so long ago, when French Jews were very afraid of the police that now protects it,” she said during the talk organized by Paris’ European Center of Judaism. “There’s been a reversal in that respect.”

The post For anti-Semites in France, police are seen as ‘dirty Jews’ appeared first on Jewish Telegraphic Agency.