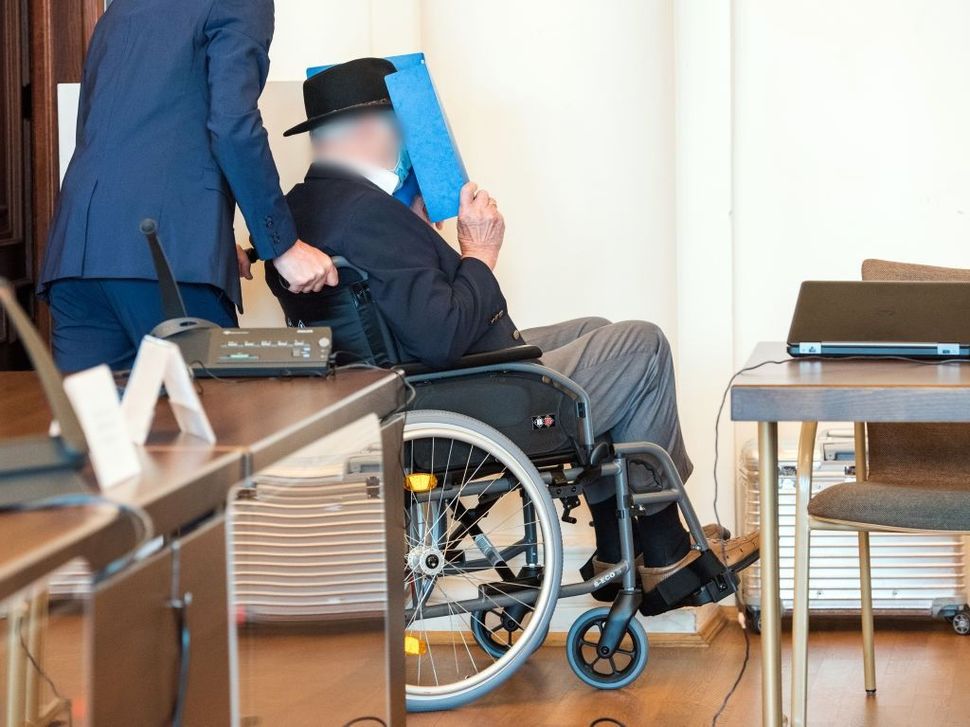 Bruno Dey, 93-year-old former SS security guard from the Stutthof concentration camp near Gdansk arrives in the courtroom in the regional court on July 23, 2020 in Hamburg, Germany. Image by Daniel Bockwoldt - Pool/Getty Images

BERLIN (JTA) – In likely one of the last such trials, a 93-year-old former concentration camp guard was given a two-year suspended sentence on Thursday – a decision that the Simon Wiesenthal Center’s chief Nazi hunter is calling a travesty.

A Hamburg court found Bruno Dey guilty as an accessory in the murders of 5,230 people in the Stutthof camp near Gdansk, today in Poland but then a part of Germany. The count is reportedly based on the number of people murdered while Dey was stationed there.

“He goes home happy and survivors have to live with their nightmares,” he said in a telephone interview.

About 14 former concentration camp guards and members of Nazi mass killing squads are under investigation, he said, adding that there is “no documented case of any German being executed for refusing to kill Jews.”

Their advanced age and that of survivors make future trials difficult.

Dey, who was tried in juvenile court because of his age at the time of the crimes, had admitted being an SS guard in Stutthof from August 1944 to April 1945 after being drafted into the German Wehrmacht. He was assigned to the camp after being found unfit to serve on the front.

According to a BBC report, Dey said he was shaken by the testimony of survivors during his trial and apologized to “those who went through the hell of this madness.” But he also said that though he had known of gas chambers and witnessed people suffering, he had not known of the extent of the atrocities.

Of the estimated 100,000 people deported there, more than 60,000 died. Most of the prisoners were non-Jewish Poles, along with some Polish Jews.

State prosecutor Lars Mahnke contended that Dey had known what was going on and actively prevented people from fleeing.

“If you are part of the machinery of mass murder, it is no defense to say you looked the other way,” he told the court, according to German media reports.

Germany has prosecuted several accused accomplices to Nazi war crimes since the 2011 conviction in Munich of former concentration camp guard John Demjanjuk, who was found guilty as an accessory in the murders of nearly 30,000 Jews in the Sobibor death camp in Nazi-occupied Poland.

That case set a precedent in that being a guard at a death camp was sufficient to prove complicity in murder. Since then, Zuroff has sought tips on possible perpetrators in an effort titled Operation Last Chance. But none of the war criminals convicted since has served jail time, he said.

The post Former concentration camp guard, 93, gets suspended sentence as accessory to murder of 5,230 appeared first on Jewish Telegraphic Agency.