Couple wearing swastika masks at Walmart confronted by other shoppers 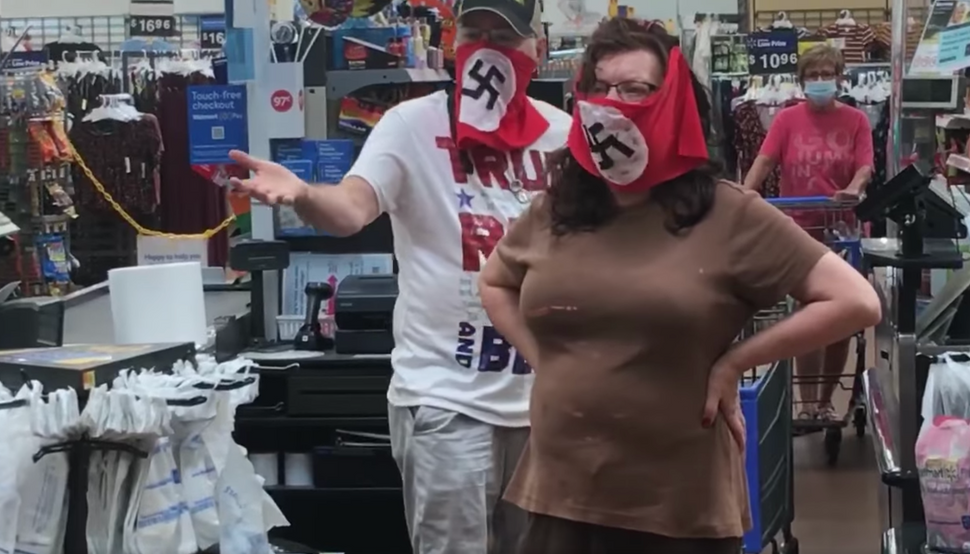 A couple wearing Nazi flags as masks shop at a Minnesota Walmart. Image by facebook

(JTA) — A couple wearing swastika masks at a Walmart in Minnesota were banned from entering any other Walmart facility for a year.

The man and woman, who have not been named in news reports, were filmed Saturday afternoon as they checked out their purchases and were confronted by other shoppers at the store in Marshall, the Minneapolis Star-Tribune reported.

They appeared to be protesting the state’s mandatory mask ordinance, which requires the wearing of a mask in public spaces.

“If you vote for Biden, you’re going to be living in Nazi Germany,” the woman said.

She said she was not a Nazi, but was also seen in a photo making the Heil Hitler Nazi salute. The woman also displayed her middle finger at fellow shoppers.

A video of the couple was posted on Facebook by a local resident, Raphaela Mueller. She wrote in her post that “I was born and raised in Germany, and I grew up hearing about my great-grandmother who fought in the underground against the first wave of Nazis in the 1930s and 40s. Let me make this abundantly clear once and for all – THE SWASTIKA IS A HATE SYMBOL AND YOU DO NOT FLY THE FLAG, YOU DO NOT WEAR THE SYMBOL ANYWHERE ON YOUR BODY, YOU DO NOT USE OR DEFEND THIS SYMBOL, EVER. END OF STORY.”

The post has had 1.6 million views on Facebook and has been shared 2.4 million times as of Monday morning.

Police issued the couple trespass notices, the newspaper reported, and they were warned that they would be arrested if they returned. Walmart officials said they are banned from visiting any Walmart facility for at least a year, FOX 9 reported.

Walmart maintains a mask policy in all of its stores; the policy went into effect last week.

The post Couple wearing swastika masks at Walmart in Minnesota confronted by other shoppers appeared first on Jewish Telegraphic Agency.

Couple wearing swastika masks at Walmart confronted by other shoppers