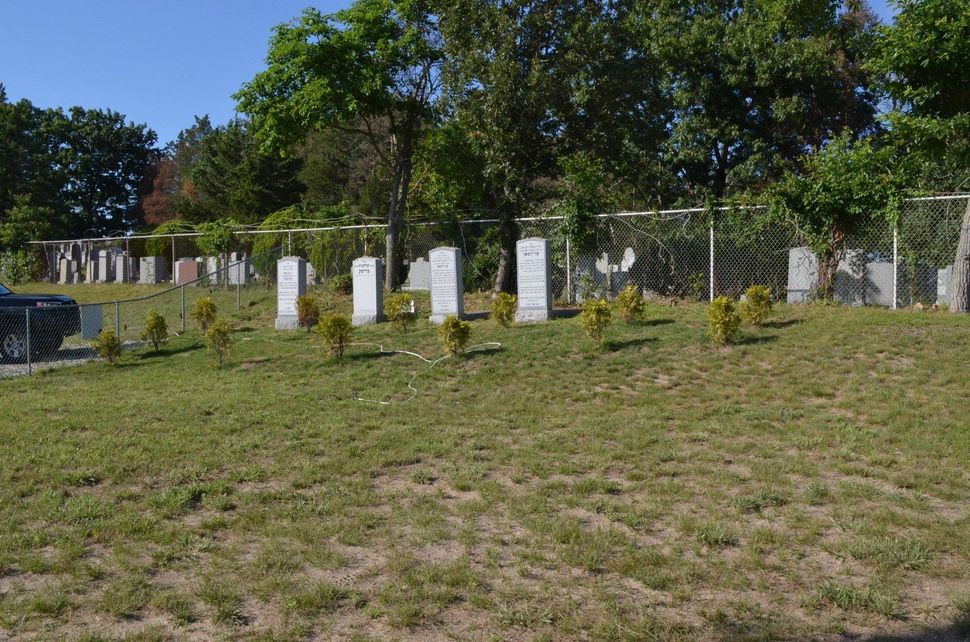 An image taken by Julia and Eugene Gross, of the place in Mount Sinai where they were told their stillborn baby was buried in a mass grave. The Grosses claim that the trees planted are an effort to hide the location of the mass grave. Image by Facebook

A Jewish couple in Philadelphia is suing a New Jersey funeral home after learning that their stillborn child was likely buried in a mass grave, without any markings, and without their consent.

Julia Gross was in the 35th week of her pregnancy when her son’s heart stopped beating, according to a report in the Philadelphia Inquirer. She and her husband, Eugene, quickly made arrangements to bury the boy, Noach, as quickly as possible and in a Jewish cemetery, in accordance with Jewish law.

They used a Jewish funeral home, Joseph Levine & Sons, that serves the Philadelphia area, which arranged the burial at Mt. Sinai Jewish Cemetery in Lakewood, N.J., home to one of the largest and fastest growing Orthodox communities on the East Coast.

The couple say they had expected, from conversations with the funeral home, that Noach would have his own burial plot in a special section for stillborn children. But when they first visited the grave several months after his birth, there was no marker, and none of the gravediggers knew what special section they were talking about.

After getting an attorney involved and contacting people involved with the burial, they had Rabbi Chaim Parnes, a member of the Lakewood Chevra Kadisha, a local Jewish burial society, take them to the place where Noach was buried: an unmarked stretch of dirt by the parking lot, an apparent mass grave for fetuses and stillborn children.

“We were just horrified that our baby would have been thrown into a mass grave,” Julia Gross said.

The couple has since learned of other families who had their stillborn children unknowingly buried in that section of the cemetery, without any individual marking. They have filed a lawsuit against Joseph Levine & Sons, alleging that the funeral home “failed entirely to supervise the burial of Noach.”

In a statement to the Inquirer, the funeral home said that it buried Noach in accordance with “the expressed wishes of the Gross family.”

The practice of burying fetuses and stillborn children in mass graves in Orthodox cemeteries dates to when those communities, in which having many children is the norm, had higher infant mortality rates, according to burial experts. Non-Orthodox Jewish movements and the Israeli government have passed policies that allow for individual burials of such children.

“What they are doing is not right,” said one New Jersey Orthodox woman who had her stillborn child buried in the Mt. Sinai section where Noach was buried. She asked for anonymity, so as not to be shunned by her community. “I’m having a hard time because I cannot have closure. I’m getting no answers to my questions.”