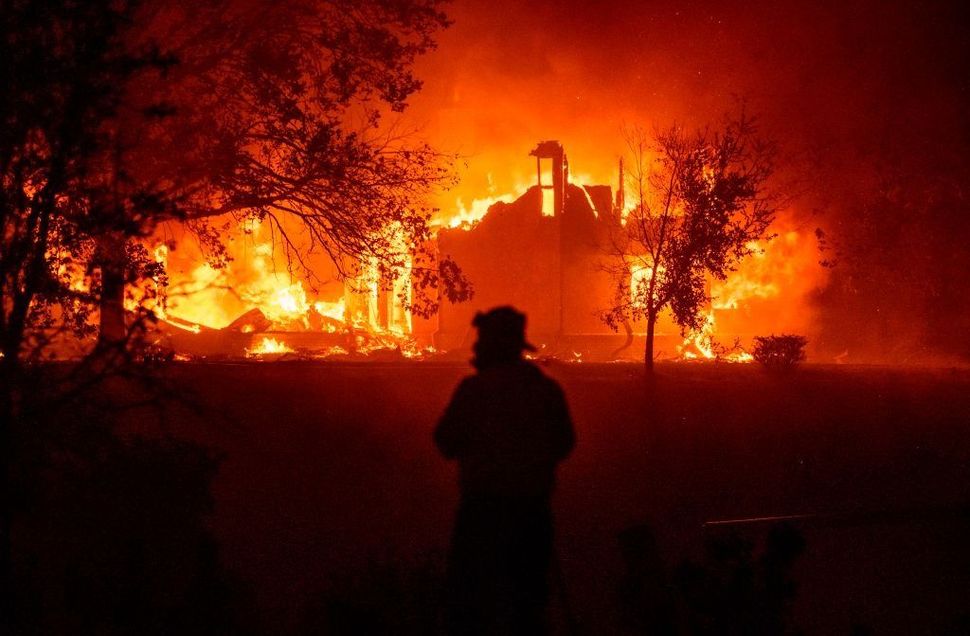 A home burns in Vacaville, California during the LNU Lightning Complex fire on August 19, 2020. Image by JOSH EDELSON/AFP via Getty Images

(JTA) — SAN FRANCISCO (J. the Jewish News of Northern California via JTA) — When the evacuation orders came last night, Guerneville resident Sonia Tubridy and her daughter packed the car and left, joining a caravan of vehicles fleeing the North Bay area and the fires that threatened to engulf them.

Tubridy, cultural director of the Russian River Jewish Community, was among the thousands of people ordered to evacuate from fires burning 46,000 acres across a vast area covering five counties and stretching from Vacaville north to Lake Berryessa and out to the Sonoma County coast. Dubbed the “LNU Lightning Complex” by Cal Fire, the danger zone has required mandatory evacuations in Napa, Sonoma and Solano counties and continues to expand.

“We were in a stream of traffic leaving River Road,” she said from near Bodega Bay, where she and her daughter were temporarily taking refuge for the day. “Thousands of cars going five miles per hour.”

With hot and windy weather forecast, more evacuations are expected, especially for areas south of the fires, according to a Cal Fire press conference this morning.

Rabbi Chaim Zaklos of Chabad of Solano County is one of those who was prepared and waiting for the call this morning. As the fires bore down on Vacaville overnight, Zaklos got ready.

Zaklos added that it was “literally raining ashes.”

In addition to the LNC Fire, other large fires are burning near Santa Cruz, and hundreds of smaller blazes are being fought in San Mateo, Alameda, Contra Costa, Santa Clara, Stanislaus and San Joaquin counties.

“This all makes this time of year quite Biblical in feel,” said Rabbi Niles Goldstein of Congregation Beth Shalom in Napa.

He said that some of his congregants who live outside the city limits have had to evacuate, although the synagogue isn’t threatened at the moment.

“There is some smoke and ash, but the city of Napa is safe so far,” he said.

“Oh my god, can you believe this?” she said. “It’s like the next thing is going to be boils or locusts.” She added that the synagogue wasn’t in the path of the fire for now.

Rabbi Stephanie Kramer of Congregation Shomrei Torah in Santa Rosa also said her synagogue was not currently at risk from the fires, but that the homes of some of her congregants are threatened.

The fires have been bringing back traumatic memories for many. Last year, the Kincade wildfire torched over 66,000 acres in mostly rural Sonoma County, destroying roughly 100 buildings and forcing 185,000 people to evacuate. The destructive Tubbs Fire hit Sonoma, Napa and Lake counties in 2017.

“It’s making everyone quite anxious and brings up memories,” Kramer said.

Shomrei Torah was a major point of relief during the 2017 fire, when the synagogue opened its doors and became a hub and command center, offering shelter, food and counseling during the crisis and for months after. But she said this time, any efforts to help will be hampered by coronavirus concerns, as people can no longer be packed into small spaces.

“It will not look the same in a pandemic,” Kramer said.

At Congregation Beth Ami in Santa Rosa, which was similarly affected by the state’s 2017 wildfire season, president Carolyn Metz recalled how four families lost their homes, and said the current crisis is bringing up feelings of post-traumatic stress disorder.

Beth Ami had planned to open its preschool on Aug. 17 but postponed until Aug. 24 because of the heat advisory now affecting the region. Metz described the “delicate balance” of dealing with the fires and the pandemic as “daunting.”

Tubridy, who will be staying in a Santa Rosa hotel tonight with her adult daughter, described the situation as “layer upon layer of challenges.” Not only are they escaping the fires, she said, but also trying to stay safe from Covid-19. “The pandemic is not gone.”

The post Torahs packed and synagogues on high alert as wildfires bear down in northern California appeared first on Jewish Telegraphic Agency.